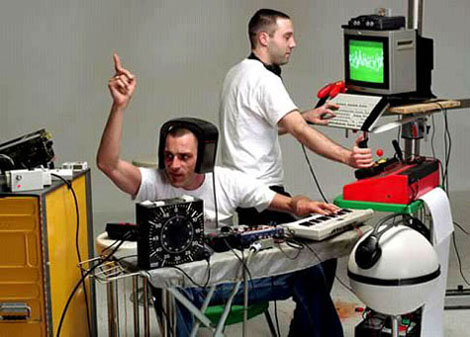 Micromusic is a web-community dedicated to “low tech music for high tech people”. It started out with the Microstation that can play the music a lot of Commodore64-games and developed into a platform for music-producers who began to produce modern music on the base of game-sound samples and old music-chips. Everyone can upload his track and if it goes throught the “Quality Filter System” it will be downloadable from the site.
One of my absolute favourite micromusic tracks (“Super Mario Brothers Techno” by Yarblad) comes from the Super Mario Remix contest, where Micromusic offered samples from the Super Mario Gameboy edition and ask people to do a remix. Right now they offer more than 100 tracks – time to go on tour!

MFOC invited them to play at Club8 which is a quite new and improvised location with an atmosphere that’s more like a gallery than a club with a second level and a balcony which is very useful for seeing and being seen. The Microcrew came with 4 people: Carl & Wanga were playing the tracks from their computers and some from dub-plates, Viola & Sugar were producing visuals according to the tracks. I thought the music was very cool and immediately wanted to dance, especially “psilodomputer” is a totally rockin’ party-track, that takes total control over my body! Most of the other people on the contrary seemed to concider the party more as some kind of concert and preferred to watch the show.

Maybe the kind of music was too unusual for the people and they’ve read that the big dance-music thing right now was 2step? Maybe they were computer-nerds that stopped moving their bodies when they started playing computer-games long time ago and don’t now how to dance? Maybe they were all hypnotized by the funky 8bit video-animations of ninja fighters and other loved game-hereos (see below!) which were beamed above the artists and inspired me to a totally new way of dancing?

I couldn’t find out but i had a great evening and a lot of fun anyway!

I strongly recommend to visit their website, althought you will have to get an account first to download the music. Loopnet did a real-video (dsl/isdn) feature including the music, the animations and an interview (in German).

Micromusic also released their first cd called “Micro_Superstarz 2000” that is a very good collection and has an additional multimedia feature.