The world’s first exposition of personal human partner robots was held in Yokohama, Japan over the course of 3 days from November 24th to 26th. The exposition entitled Robodex 2000 aimed to encourage and develop the personal robot industry where robots can live together with people. People came from all over the world to see our new friends created by humans.

“It’s worth standing in a line for four hours”, an old man muttered looking at the Sony’s dancing robot ‘SDR-3X’. What kind of future did he see while looking at this robot? Some people were making sure of their seats more then 30 minutes before in order to see ‘the starting of 100 AIBOs all together’ which was held at a main floor. There were also many people who wanted to get their photographs taken with the Honda robots. 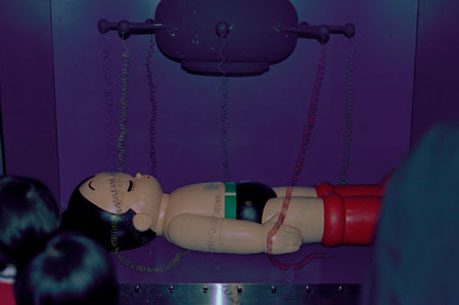 At this moment in time, the personal robots are of no practical use. Nevertheless, everyone who gathered at this exposition was really excited with everything the robots performed. Great shouts of joy arose from the crowd when the Honda ‘P3’ was going down the stairs. It was an expression of their expectations for the bright future. Everyone may have got a feeling of reality that the future they’ve dreamed of since their childhood would be closer.

Now I would like to introduce some impressive robots. 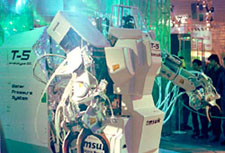 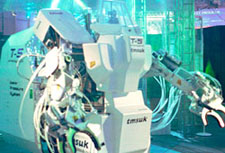 ‘T-5’, a robot for made to deal with natural calamities by Tmsuk Communication Technology. It was created on the assumption that it could do rescue work in environments hostile to people. It’s no more than a prototype, but many people’s eyes were glued to the robot with a brave figure and hidden potential. I really hope that Mark Pauline uses this robot for his performance.

Honda Humanoid robot P3 made a great sensation and received admiration from the world since its appearance was also exhibited together with the previous models ‘P1’ and ‘P2’. P3’s walks with two legs. The figure walking unsteadily step by step was just like a human, and it gave me a strange feeling of wrongness.