The second edition of Montreal Biennale was launched on September 28th in an unusual place. What used to be The Palais du Commerce was chosen to be the meeting point for art enthusiasts. The abandoned Palais du Commerce will soon be demolished to make room for La Grande Bibliotheque du Quebec (Provincial library). An international architecture contest was held for the construction of this public library which is scheduled to open its doors in the first quarter of 2002. Contest entries from the five finalists were showcased in a special area of the exhibition. Paktau Architects from Vancouver was selected as the winning team. London’s Zaha Hadid won a special mention from the jury for her futuristic approach.

Meanwhile, a skate park for skateboarders and roller-bladers was setup on the the floor above the exhibition. As you walked around the place, the constant sound of wheels and skateboards landing on the floor was a bit disturbing but fit perfectly with the half-demolished feeling of the place. 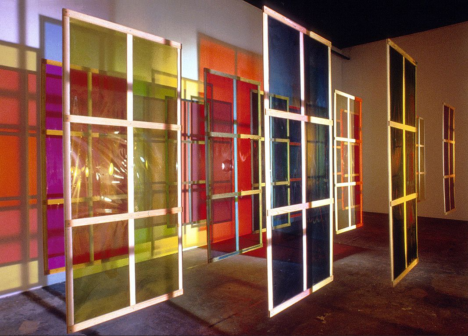 But let’s look at the exhibition itself. The exhibition was divided into three categories: visual arts, electronic arts, and architecture (the last two being very quiet). A sense of time was present in almost every work. Michael Snow‘s ‘Place des peaux‘ (interplay of colored shadows in a field of colored windows), Bertrand Lamarche‘s ‘Tore‘ (swirling galaxy of reflected light generated with the a turntable and a projector) were amongst some of the most interesting pieces. 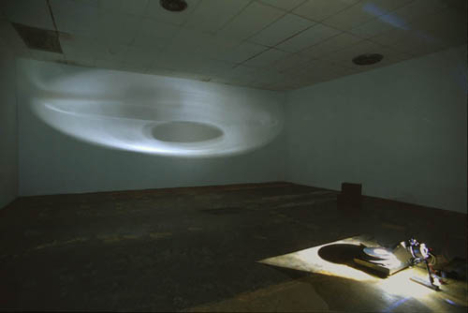 Even more impressive was the work of Japanese artist Yoshihiro Suda who presented carved and painted flowers hardly distinguishable from real ones. Works-in-progress were also part of the act. So is Massimo Guerrera‘s performance, which I’ve missed, combining sculpture, furniture and the living space. Guerrera hired actors to take part in his plays where participants navigate in his surrealist environment. Parts of bodies from the artist and actors are molded in plastic, lunch is served and everybody leaves. Only traces of the performance stays for future visitors.

Christian Marclay‘s isolated ‘Guitar Drug‘, where a Fender Stratocaster (American hero) plugged in to an amplifier and tied up to a truck is being dragged on the road. The sound coming from the instrument sounds really painful and the whole act is presented on video.

Architecture and electronic arts were a bit left behind and poorly represented. New Media project where amongst the worst I’ve seen. ‘Houses-Places’ gathered Canadian constructions made by Canadian architects was nicely presented.