Produced by Fashion Laboratories for the Environment Inc. in association with the Downtown Arts Festival, Fashionlab 2000 took place on a slightly rainy evening of one Saturday in September. The show was hosted by Eyebeam Atelier, a parking garage and the future site of the Museum of Art and Technology, in the Chelsea area of Manhattan.

As one approached the location of the show, a vertical series of glowing fluorescent lights welcomed the visitor. Designed by LOT/EK, a rising architectural duo of Giuseppe Lignano and Ada Tolla, a rather worn-out parking garage was transformed into a cocoon-like body around which visitors roamed. The vertical lights were covered with translucent white shrink-wrap plastic in order to create walls that surrounded the preparation area rather successfully.

Two elevated catwalks further surrounded these glowing walls. As the visitors walked deeper into the space along the catwalks, they discovered three projection screens. A DJ group, Organic Grooves, spun groovy music against projections of cityscapes and unidentified morphing 3-D computer models. As the fashion show started, live video footage of behind-the-scenes preparations (as well as models on the catwalks) was projected additionally.

The fashion show featured the works of Art Point M from France and trash-a-porter from New York City. These two collections were presented simultaneously on both sides of the space, creating a juxtaposition of two fashion shows in one space. While street-and-nomad-inspired clothes of trash-a-porter were worn by people approached on streets of New York, somewhat politically charged work of Art Point M was worn by six models from France as well as the designers themselves. The show took place against the background video projection of cityscapes and other live footage, into which models seemed to appear and disappear. 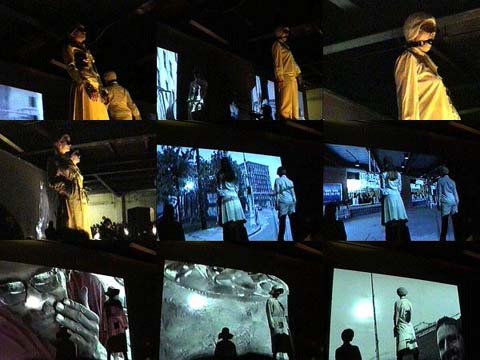 Many of the Art Point M clothes bore messages such as “Black is Beautiful” or “Black Power” sewn on the surface. In addition to these literal messages, models walked the catwalks, tied or handcuffed with S/M-like props. Although fashion with a political message is not radically new or surprising, design can achieve a new level of strength and meaning, as Art Point M showed in their work.

So, these were the objective descriptions of Fashionlab 2000. Now, a subjective review and opinion about the show.