The world exposition called ‘Expo2000‘ will run through October 31st in the north German town of Hannover, Niedersachsen. The key theme of this year’s expo is ‘Humankind – Nature – Technology’ based on the World Environmental Declaration and Agenda 21 adopted at the Earth Summit in 1992. It aims to represent the utilization of technology in terms of the coexistence of humankind and nature. More than 190 pavilions and lots of projects are developed in and around Hannover and it’s almost impossible to visit all the pavilions. 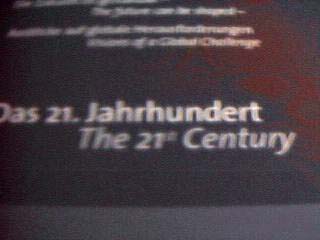 After the two-hour trip from Frankfurt to the Hannover station, I could see the signs of the Expo everywhere. The official newspaper of Expo is published every morning / evening during the period and it’s available for free at the place for the Expo and the station. First, I got a ticket at the ticket counter at the station (it’s less expensive than at the expo place), then I headed for the trade show place in the suburbs to see the Expo by tram. Inside the tram, there was a liquid crystal monitor and it displayed pictures related to the Expo.

At the huge gate of the entrance area, people who got evening tickets waited in a long line. Though almost of all pavilions are closed at 21:00, many people regardless of age or sex seemed to get the evening tickets because it was one-fourth the price of an all-day ticket.

I entered the place through a ticket examiner. There was the information center on the right-hand side and the terminals with a touch panel and a smell-generation device were installed there. It proposes a plan according to what you want to see and the paper can be printed out. Unfortunately, I could find no one who was using the terminal. Also, you can rent an electronic car and electronic bike to move around the place, but they’re rather expensive. I decided to walk around the place and therefore I was tired while walking and missed some pavilions.

As I walked inside the place, pavilions with various outside appearances came in sight. The Pavilion The Netherlands designed by MVRDV and the Pavilion Japan made of recycled paper were in the news even before the expo started. You can see all sorts of architecture such as the Pavilion Hungary which looks like a huge vessel and the Pavilion Switzerland which combined wooden lattices. The most impressive one was the Pavilion Estonia. Trees in the shape of carrots are joined together with wires and the movement of those flying carrots on pavilion’s roof is worth seeing. It was especially wonderful to see them lit up in the night.

Regarding the exhibits inside the pavilions, the use of touch panels for information and multi-screens like the huge projection in the Pavilion Germany were impressive. On the other hand, there were so many intentional negligences just to introduce their countries and it made me rethink about the meaning of the Expo. However, there were some pavilions that make us feel the future at the last Expo in this century. Now I would like to introduce two of them.