The 11th Yubari International Film Festival was held over the course of 5 days starting February 18th at Yubari, Hokkaido. With the invited films from overseas, lots of films by young and amateur creators were collected whether they’re well known or not. It became an impressive festival. This month’s Shift covered the festival focuses on a program called ‘Digital Cinema Presentation’. 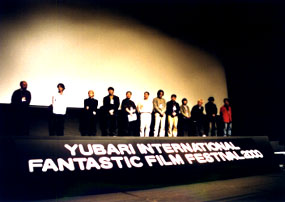 “I know there’s a view that film festivals should collect only films which pass through a distribution route of films, but Japanese films have a visual technique they can be proud to the world. I think it’s meaningful to do this event called ‘Digital Cinema Presentation’ as one of the programs of a film festival, for the purpose of connecting the latest technique with audiences.” At the opening, those words were given by Yoichi Komatsuzawa, a chief producer of this film festival.

As the name shows, this event is just a ‘presentation’, not screening the finished ‘films’. Almost all of them are ‘unfinished’ previews and pilot versions. However, I found some fulfillment that I took a peep at the near future of films. If you are an ardent film fan, you might have already checked them at some events, but these films won’t be generally released. I think it’s meaningful to screen these ‘unfinished’ films at this film festival where lots of ordinary people, including tourists, come.

Those films were made with digital tools and projected. Though I’m not well informed about the digital technologies, I felt that those pictures projected on the large-scale screen were equal to ordinary movies. After the screening of all programs, lots of audiences, participants and guests were standing in a circle around the digital implements.

Now I would like to individually review the most impressive pictures.

My favorite one, ‘Heavy Rotation’ by Trilogy. I would love to see it again. A bear molests children, kidnaps them and converts them into bears in a black and white world. It’s a kind of perverted story and ignores the motion picture code of ethics, but on the other hand, the bear factory is very cute. The roller belt conveyer is a smile mark and the switch bar is duck. It’s an excellent contrast to such cruel molestations. This must be a masterpiece of black humor which has a pleasant aftertaste (or simplicity like a black and white Dick Bruna).