JODI is a unit of two artists, Joan and Dirk, based in Barcelona, Spain. You can view their works as you access to the internet, but those installation-like radical works seems often to drive the machines into crash.
Those works give us senses and meanings of noise music visually as we are on the net world which usually follows the rule. We can take it as a warning to the uniformed digital society.
Their activity caught a lots of publicity by the contribution to the exhibition in the book ‘CREAM’, as one of few artists on the field of internet. This time we had a direct contact from them at their visits to Japan and had an interview. 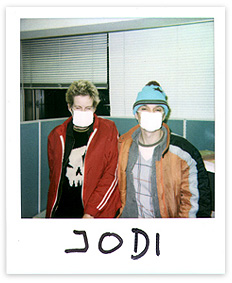 Dirk: When we started about 4 years ago with our website ‘jodi.org’, the web was ‘academic #gray’, because the Mosaic browser did not support backgrounds, there was almost no graphical work around. [1] Our first works distorted the classic page-layout by making basic errors in HTML and putting contradictory commands in the code. Many people thought our site was broken and complained. [www.jodi.org/100/hqx] [www.jodi.org/location]
We felt that the browser-Tags imitated ‘Text on paper’ to much and we resisted that with ‘Cyber-green on black’.
At the time we were in CADRE San Jose State University, [2] so there are also military influences. [www.jodi.org/beta]

Before you started internet-base art works, did you work on some other areas?

Joan: I did photography combined with 3D modeling, and Dirk did Zapp-tv, but we never worked together.

Did you know each other at that time?

Joan: Yes, we started our own Domain because we needed the ‘jodi.org’ URL channel for our new works.
We shifted to the network as a medium, not making prints or video anymore.

Dirk: With photography, magazine, print, radio, TV… the production machines are available but not the distribution. Their specific links to society are closed. [3] Now new media exhibits are being organized with the title ‘net art’ just as in the 70′-80’s when there was ‘video art’ and the ‘net exhibition and collecting’ is being copied from then. That is a critical mistake with the net medium! Video art is in reality, experimental TV without access to the medium and as an alternative it needs the art channel. But for the net, the distribution channel exists with the world wide web, and is neglected !?
‘Networks’ exist only in the network context. [www.jodi.org/map]

People like in the 60’s or 70’s has predicted the development of technology, and today in the beginning of the 21st century we have that kind of development. Communication tools like telephones, TVs, radios, internet and so on were developed and, through those tools, the way of communication, including forms of representing art works using technology has been changed. What do you think about it?

Dirk: ?…last years, a lot of alternative groups, artists, designers, etc, established websites and most of them rent 50MB webspace at commercial US serverfarms or use the academic network.
That works now but when something changes in the providers policies; censor, traffic, pricing… there is no back-up system. Even the New Media centers cater around this fragility.
Curators and designcollections should be aware of this, but they only represent surfaces and collect and don’t give a shit about the future of the alt.web. They exploit the hype of ‘net art’ and within 10 years let it drop dead.
But some alt.projects are also web providers and interfere with local media-politics, like Namespace [4], The Thing [5], Public netbase [6], This is Your Server [7], Ljudmila.org [8], Desk.org [9].

I think the way of commucnication system right now would change somehow like policy change or whatever in the future. but in a way, the change in the communicaiton system has been shifting towards image based one, beyond words or languages, through the computer network.

Joan: But I think especially the internet is really language based..

Joan: E-mail and html so I don’t think in that sense it changes and to communicate with images is not specific for the net, photography or advertisement are also ‘worldwide’ .

That’s what I think about your works which reflects what you’ve just said about the “language base” communication in the nowadays society. In our society music, graphic or anything is explained with words in the magazine, for example. And people read it and they act like they understand what it is. Even the communication network system has been developed, the value of art works tends to be distributed through words or languages. But your work seems a lot more straight, in a way of representing works, without words, that people will view a lot more straightly…

Dirk: Yes, guidelines for our work are “No content, No story,”

Dirk: “Material digital”, because we do programming ourselves, we emphasize the physical quality of digital systems, almost clean. A blinking screen is material. %Undo %Select %Delete %Send are real properties with real consequences.

Dirk: The fast evolution of CPU power has created a digital junkyard. Digital imagery is related to the power of the chips. There is no software. [10].
The new chips are on the edge of photorealistic 3D games which confuse with reality, like hypercinema.

Joan: But there are still these Tamagochi-like games which can connect into dreamcast or playstation, really ‘drawn on very big pixels’ like, in a way very primitive, opposite to 3D realism. Gradually all these possibilities evolve to be netcasted, to blend with chat and on-line games. Like telegram, e-mail, html, games are just signals.

Dirk: …on slow modems you see the code.html being dumped on your screen.

Do those things that you just talked about “signals” relate to the reason why there are not much information about Jodi? It seems that there are no interviews, or profiles like that.

What is the purpose coming to Japan?

Dirk: Well we have some friends in Tokyo and our participation on Gasbook#5, made us curious about ‘digital wonderland Japan’…

Joan: It seems like for many years we talked about “maybe one day we visit Japan” and now we’re here with no specific reason. [%Bookmarks]

JODI gave me a comment on their participation in Gasbook5. They are interested in the interface formed with many folders which is similar to the interface of desktops on the computer.
Recently JODI is working on OSS.JODI.ORG and games. A game titled ‘CTRL-SPACE’ is a Multi-User Space in which the participants can extract each other. For this you need QUAKE1 and CTRL-SPACE, see the preview site [ctrl-space.c3.hu].
I guess this game is also related to the way of representing their art works under the guidelines of ‘No content, No story and Material digital’ as they said in the interview.
Please check out CTRL-SPACE site after saving all important documents.