Shift gently suggested I include news aside from music this month, which at first I found puzzling – I hadn’t realised there was anything else of any importance. After some long hours of soul searching, however, I realised that there was indeed another core aspect of our human condition worthy of global attention: namely that sweet intoxicating beverage known as beer. 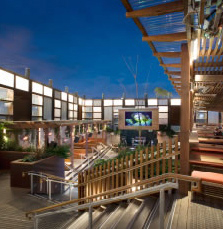 Surprisingly, Sydney’s recently voted No.1 Pub is a stone building hidden away at Rouse Hill, a good hour or so away from the city center. Recently collecting the Australian Hotel Association (AHA) awards for ‘People’s Choice’ and ‘Best Bar Presentation and Service’, its none other than the Mean Fiddler Tavern, opened late 1996 at the site of the 1826 Royal Oak Inn.

Having never had the good fortune to visit Ireland, I guess I’m in no position to rate the establishment as an Irish pub – I can confirm, however, they serve a mean pint of Guiness – right down to the shamrock artistically in the head.

The Fiddler represents a strange blend of Irish and Australian culture, which is reflected in the building itself – originally designed and built by convicts as a coach-house, with newer extensions designed by award-winning Irish architects and furnished by antiques from all around Australia and Ireland (and one or two from Paris, for some reason). The four provinces of Ireland – Ulster, Munster, Leinster & Connaught are represented in Gaelic crests, or so I’m told – Gaelic was never one of my strong points at school…

Although it can get crowded, the Mean Fiddler definitely has one of the friendliest vibes around, without being too sleazy – see you Friday and we can chat at greater length over a few pints of Harp.