A solo exhibition by Takehiko Sanada is taking place on the basement floor at Tokyo Internatinal Forum. Weaving the animal hair of sheep, horse and goat, he creates hand-made coats of the felt which is meticulously made of the hair. 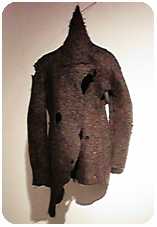 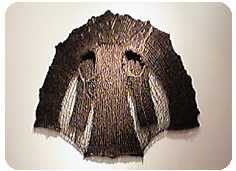 An unforgettable experience he had when he was travelling in Greenland is the driving force for all his creative activity, he says. An Innuit he became friend of suddenly passed away and there left in his house was his coat of seal fur and another seal fur hanging from the ceiling which he was to make a fur coat of.

He had worked as a fashion designer for Issey Miyake which is famous for its unique material and structural design, and later he learned sculpture under Richard Bacon.
For this exhibition, he created a limited number of clothes titled Living in Fibre Work that are pullovers and cardigans with exquisute pleats.

As he claims, there is not many artists who are able to create artwork of clothes.
he is looking for any artists and curators who are intersted in his artwork and can collaborate with him.

He is going to have another exhibition as a jewelry designer in Amsterdam from the 29th of November till the end of January next year.