This fabulous survey of Barbie dolls and accessories was held in the equally fabulous setting of the Rose Seidler House, situated amidst the native bushlands of Ku-ring-gai National Park.

One of the best examples of mid-century modern domestic architecture in Australia, this purist, Bauhaus-inspired dwelling was designed by Harry Seidler, and commissioned by his parents, Rose and Max Seidler. The perfect partnership of domestic archetype and archetypal domesiticity, this exhibition runs for three consecutive Sundays in April. 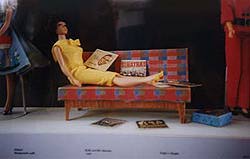 This collection showcases a dizzying array of Barbie dolls, ranging from Eskimo Barbie to Oxford Street Barbie, not to mention the quintessential Barbie accessories like campervans, lounges, baby Barbies and even a Barbie poodle. On the opening Sunday, the diverse disciples of Barbie gathered round – everyone from 6-year-old wannabees to 30-year-old wanabees – proving once and for all that Barbie’s appeal is universal and timeless.

As sexy as Barbie might be, the house still manages to steal the show. Retaining the original Knoll and Eames furniture, set against the minimalist lines of the rooms and the Mondrian-inspired panels of red, yellow and blue, this house is every style-nazi’s dream home. The focal point of the house is the verandah, which has an original mural painted by Harry himself and inspired by the drawings of modernist color-master, Josef Albers. All in all this exhibition is well worth the lengthy trek to the upper northshore Sydney suburb of Wahroonga.