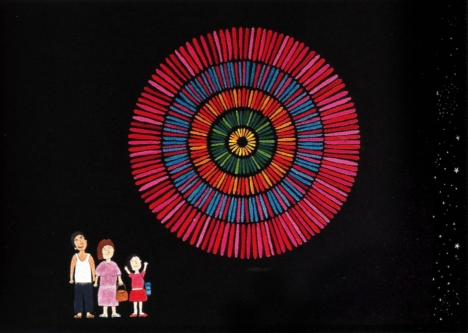 HANA-BI (Fireworks) directed by Takeshi Kitano won the grand-prix at the last Venezia Film Festival. Prior to the roadshow in Tokyo, Takashi Kitano Gallery was held featuring his paintings which were used as props in the film and were all painted by Kitano himself.

He started painting right after he got out of the hospital after a serious injury from a traffic accident in ’94. His paintings look so amazingly skillful for his 3 year painting experience. Although his films are highly regarded worldwide, the Japanese audience don’t seem to be very enthusiastic about the great films by Kitano. The Japanese should be proud of his being a film director.