Josh Ulm (..about future involvements): I like to find a balance between well-known and less well-known.. People like you and Matt Owens, who is really well known, obnoxiously well known, and people you have never heard of before. Pretty much anyone can hook up and see Auriea Harvey and Matt Owens, all the people who have done it in a million of times, that much is good, they do good stuff, and I like to get them on there, but I also like to get people that you’ve never seen before, never heard of before so that you really get to know different stuff on there..

What I think I’m gonna start doing for REMEDI from now on, I wish I had done it this time, instead of me asking question at them, I much rather had other artists interview the people, and than put the interview online, that’ll be a lot nicer than having them answer a whole bunch of questions.. what I don’t like is that when you guys write your answers, they become very like scholastic, very.. I like a bit more personality came out of it, you got something really personal from it, instead of just,.. saying like, you write a technical brief of all the things you hoped to accomplish with it, it could be a little bit more lively. I like it to sound more like in a magazine, rather than just ‘text.. project.. text..’ 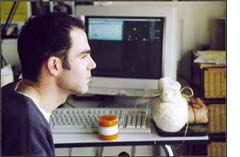 When do you started this?

Actually I started it in 1997, a long time ago.. when I was still living in Maine.. but it launched on May 1st of last year.

How come that you switched from ‘Eye Candy’ to this approach?

Good question! Mainly because Eye Candy is a piece of shit (laughs..). It’s true, it’s nothing, Eye Candy is a joke.. Eye Candy was always just what it was, a way to make connections, a way to get a foot in the door..that’s kinda how it started off: me find a really cool place, that I wanna work for, writing them and saying: ‘Hey look I put your site up, and hey, who are you? And this is who I am, and are you hiring?’.. it worked out good, got me a job and got my name out there and now I am doing all the stuff I really liked to do.. but Eye Candy offers no real creative outlet for anyone, that’s pretty much all it is..even updating it.. It was work, it was production, it wasn’t anything, I wasn’t getting anything out of it.. so. REMEDI is more.. hmm.. personal, it’s actually real, its real content, it’s not re-using someone else content; Anyone could go out say: ‘this is good.., this is good, this is good..’. But I’m asking to actually do me something, to produce it, and put it out. That’s by far a better scenario to be in. And first, just recognizing commercial work is fine, but there is so much more to be gained by you sitting down and all the nightmares that you had to go through to do it, I mean, hopefully you learned sth. in doing that..

Sure, sure I learned sth!

What did you learn?

How much harder it is, if you do the concept-work first, if you really sit down and start thinking what you want to do, and than start working on that, instead of the other way round..

The concept kinda come out of the brainstorming? ..out of the playing?

Usually if you do client work, you know right away what you have to do.. All the guidelines are already set up.

That’s actually one of the things people always complain about when I ask them to do REMEDI, that it is so open, pretty much ‘do everything you want’. Feel like ‘Oh yeah, that’s easy..’, but than they end up ‘I don’t know what I wanted to do, I got nothing…’. That’s nice about it for you, you find out what works for you and what doesn’t.

But even more so than that, the reason why I think the write up is so important is because you can really pass that on to someone else. You are this kind of designer, you are doing these kind of things..or you think of the internet in this way. Or this is what I found out about it, like ‘the hard way’.. You can learn from that, I think that’s really important..