Many of Ohtake’s works record pieces of recollections, whether from innumerable travels around the world or scraps pasted together to preserve and resist forgetting them. These “souvenirs” are collated in the section Memory, which include his renowned Mnemoscape series, such as “Mnemoscape 14” (2020) and “Mnemoscape 32” (2020–21), as well as “Mnemoscape 0” (2022) in the second floor. Large layered oil paintings are mixed with marble powder, sand, gravel, and other materials, and composed three-dimensionally. Ohtake believes these creations remain at the end of one’s memory, and that their appearance may change dependent on the surrounding light or the viewer’s perspective. One needs to scrutinize deeply into the overlapped colors and materials to grasp what could be hidden dimensions waiting to be discovered. 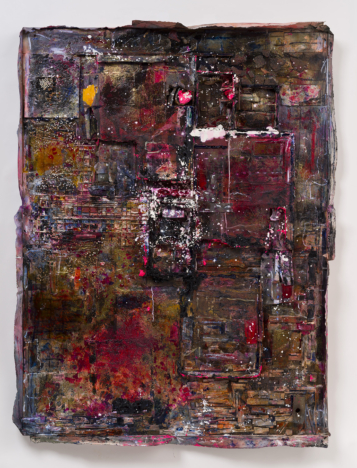 Also in the same section, we find “Oku-Kei 14” (2018), a captivatingly colorful collage of superimposed materials: photographs, Japanese paper, cigarette paper, fusuma paper, packing tape, hemp cloth, silk thread, and others, pasted into abstract compositions. By sealing one layer over another, various landscapes surface from empty spaces. The overlay technique is typical of Ohtake’s innovative approach to interstice between two- and three-dimensional constructions. 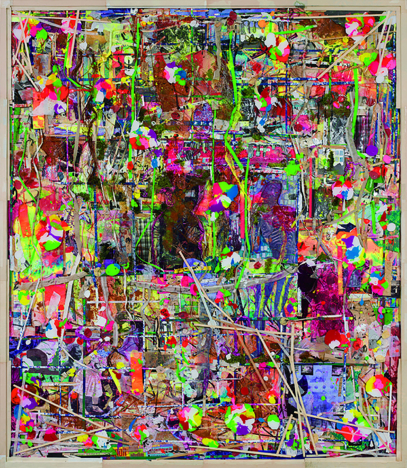 In an interview by Massimiliano Gioni, “Critical Mass,” Ohtake claims that the logic behind the assemblage of things came to him in a natural manner. Acquiring profound interest in Pop art and Western modern painting of the 19th and 20th centuries, he believes that the “essence of art is most evident in the incomplete works… that produce perplexing, unfocused expressions… drawn to the random accidents, or accidental traces that occur in the process of arriving at a completed language.” 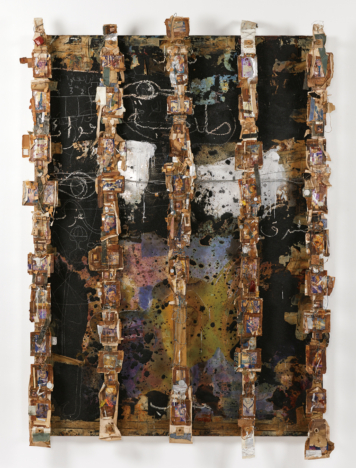 Reflecting on this philosophy, another exceptional technique in his works is visible in his Retina series of paintings found in “Memory, Time and Dreams/Retina” sections. Ohtake creates exploratory images by manually altering Polaroid film, enlarges the images, and covers them in transparent plastic resin to produce a painting, thereby allowing the texture of the resin and the glossy colors of the photographs to form two superimposed but independent layers. For instance, the “Retina (Memories of Falling Silver)” (1994), was completed with spray paint, oil stain, plastic resin, Japanese paper, hemp cloth, cardboard, bank notes, and other objects. The resulting effect is enthralling, like watching diverse elements of matter evolve into new moving media. In “Retina #31 (Candle Smoke)” (1990-91), cloth adhesive tape and resin are covered on laminated chromogenic analog print, then mounted on a wooden panel.