For his first retrospective “Maison Marocaine de la photographie” in France, the Moroccan artist Hassan Hajjaj has been given a Carte Blanche from the Maison Européenne de la Photographie of Paris (MEP), as part of the third edition of the Biennial of Photography in the Contemporary Arab World. The self-taught artist freely invests two floors of the spaces of the MEP with photographs, video and installations, as well as furniture, decorations and clothing that cross traditions of Nord Africa and the pop-culture aesthetic of London. His artistic world thus reflects his ability to create bridges between these two cultures, crossing styles, universes and icons. 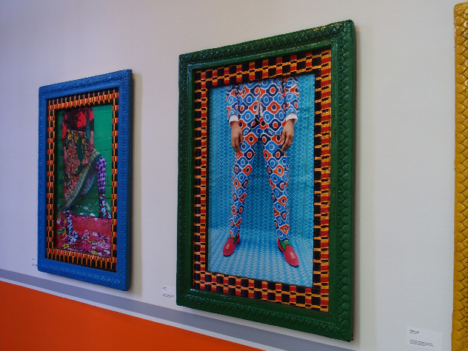 Born in 1961 in Larache, Morocco, Hassan Hajjaj moved to London with his family when he was 13 years old. He soon became part of the London underground scene and approached fashion by creating his first clothing brand RAP (Real Artistic People). He turned to photography few years later, heavily influenced by the fashion world. In the 8 photographic series realised from the ’90s till nowadays and presented within the exhibition, he celebrates women and men from Morocco, but also friends from all over the world catching them in colourful clothing and in dynamic and expressive poses.

His fresh perspective raises questions on the relationship with the contemporary society, on identity, on over-consume; his portraits of confident and strong Arab women overthrow stereotypes and prejudices. If Morocco, and in particular Marrakech, is the place of many shootings, the country and its culture are not the subjects of magazines, but they are just an exotic setting. 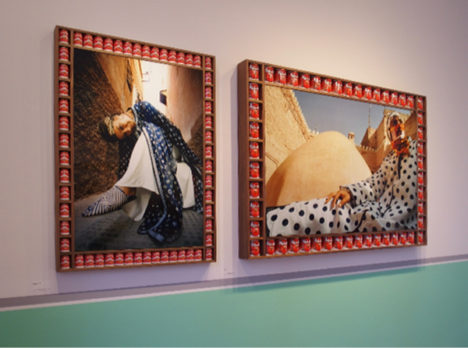 View of the series Vogue: The Arab Issue, Hassan Hajjaj

In the first series “Vogue: The Arab Issue”, he asked women to pose in the streets of Morocco like occidental models, wearing colourful hidjabs, djellabas, babouches, with the most craziest patterns and revisited brand logos. Self-confident veiled women challenging the Western ideal of beauty are the subject of this series. Hajjaj shoots from below, using a wide angle to create an effect of empowerment of his subjects.