Yoichi Ochiai is a super creator who at just 30 years old (b. 1987) already has an astonishing career. He is a media artist who holds a Ph.D. in Applied Computer Science from the University of Tokyo. Furthermore, his research work as a scientist is acquiring praise worldwide. His recent exhibit at the Eye Of Gyre from April 20 to June 28, 2018 in the heart of Omotesando presented 15 new and recent works and was simply breathtaking. Beginning in 2017, Ochiai established the “Strategic Research Platform toward Digital Nature” and became Platform Director and Associate Professor at the University of Tsukuba. His main focus is on VR, tactile presentation methods, digital fabrication, automatic driving and human control.

We were lucky enough to catch the last days of the exhibition. Beautiful metallic sculptures: spheres and waveforms hovering in some sort of magnetic field is something you don’t stumble upon every day. In addition to his sculptural work, a few video projections helped to dress up the space and embrace his sculptures, serving as an eclectic and multi-colored background. One could spend the whole day gazing at them. Some study work on the beauty of nature, movement, and electro-magnetism was also exhibited. The complete title of the exhibition was “Beauty of Natural Resolution ∽ End to End, Transformation of Material Things ∽ Digital Nature.” 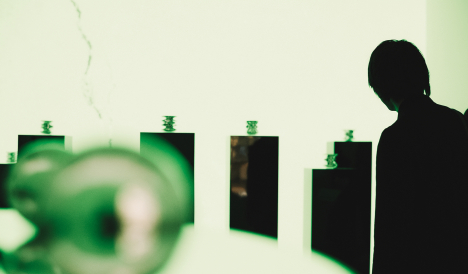 At the entrance of his exhibit at Eye of Gyre, the first thing you encountered was a room with different organic objects, plants and arguably Ochiai’s best known work, “Colloidal Display,” which projects holograms of butterflies on bubble liquid film by using focused ultrasonic waves. These art works were able for purchase, “I made a point of selecting works that individuals might like to display in their own homes.”

The next room was filled with beautiful, hovering sculptures: six mirrored spheres levitated above a base, slowly circling, and thus creating a beautiful illusion which was in fact real and tangible. This part of the exhibition was called “Levitrope”, whose initial idea was first presented in 2016. Furthermore, the lightning and video projections were there to enhance the final result by giving a sense of depth but also an eclectic artistic form. Each color, each pattern provided a different mood and yet felt part of the same sculpture, blurring the distinction between materials and images.