The theatrical performance ZOO directed by Chiharu Shinoda was presented at BUoY, Kitasenju, Tokyo from February 15th to 18th, 2018. The first performance was carried out at Kyoto Art Center as a program of the KYOTO EXPERIMENT, Kyoto International Performing Arts Festival in November, 2016. It was performed in Tokyo for the first time as part of TPAM Fringe program of Performing Arts Meeting in Yokohama 2018.

“The audience has assembled to witness the strangest animal, the Human Being. One Human Being is in a cage, strapped into a VR headset. Two more Human Beings are guides, leading the audience through the exhibition. The performance begins with an explanation of the human body, and then the guides introduce one aspect of humanity after another: there are humans in motion, humans mimicking other humans, and humans that communicate. As this takes place, the border breaks down between the human observers and the humans being observed.” (ZOO website)

In the theater, “the strangest animal, the Human Being” is exhibited as the proposal on the website. It is standing room only. The audience leaves their bags at the desk and walks around the space, which is composed of artificial turf, monitor, stands, and fences. Inside of the fences, there is a half-naked man (Kan Fukuhara from Hanchu-Yuei) wearing a head-mounted display. There are two more actresses (Mika Masuda, Yamuna Bambi Valenta) and an actor (Yasushi Takeda) in the tearoom-like space. The audience is encouraged to photograph during the performance. The half-naked man also becomes a subject of the photo-shoot. 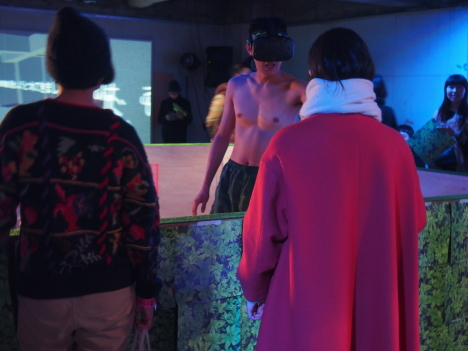 There is no narrative development in ZOO. Events for the exhibition of the Human Being keep running dispassionately. A female performer starts to explain the Human Being. On the other hand, the half-naked man reads sentences on the video screen as if they are meaningless symbols. The video on the head-mounted display is shared to the larger monitor for the audience.

One option for a good shot is during the march of penguins and with the announcement at the beginning, which sounds like a penguin show of the Asahiyama Zoo. When the audience sets their cameras, the female performer walks in front of them. On the monitor, polygonal penguins are projected. 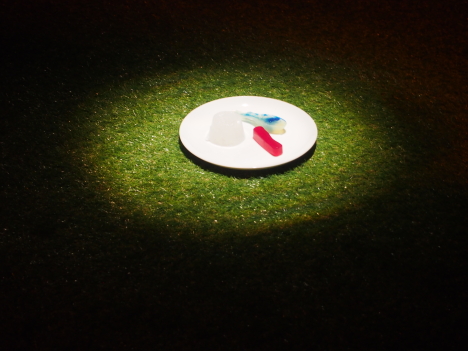 “You can feed the Human Being. Does anyone want to try?” Colorful jelly candy is distributed to the audience. They call the half-naked man and feed him like a dog. Some viewers are drawn by their curiosity and feed him. Other viewers may be confused. The response of the audience is quite a contrast.

In addition, there is a man in the tearoom. He wears a monkey mask and performs Kyogen, which is a traditional comical play. Then, he steps down from the stage and walks with a shuffle to the half-naked man. He takes the head-mounted display and leaves the space. The main subject of photo-shoot exposes himself by the tearoom man’s repetitive eccentric behaviors. 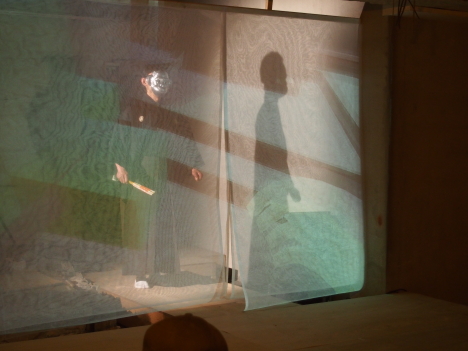 The female performer repeatedly tells the audience that the situation is going to be settled. The management program of the Human Being Zoo breaks down because of the removal of the head-mounted display. The man who recovers his eyesight stands on the stage and starts to talk about the meaningless words/signs. Then, in the jungle like space, he communicates with other performers in animal’s crying-like language. Finally, the half-naked man wears clothes and sits where some audience is sitting, then the play ends.

The direction is Chiharu Shinoda who worked as a director of FAIFAI and currently works and lives in Thai and Bangkok. The performance is created based on a play by a Chilean playwright Manuela Infante.