Yuko Maruo, who shifted her career from the creative field to the art scene, makes sculptures that are a collaboration between clay animation and photography, and as a result creates unique art pieces of creatures.

Her unique pieces have a white and soft atmosphere with fresh vitality, twisted happiness, and cute but not ordinary peaceful feelings. Many art fans are attracted by her style because they are full of pure and strange originality.

For this interview, she told us about a new series “PULSE” of “ART NAGOYA 2017” being held in February, in Nagoya, Japan and also about her previous work and future goals. 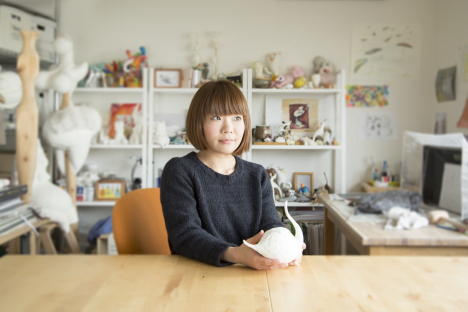 First of all, please introduce yourself and your artworks.

I make sculptures. I use various materials. But, recently I have mainly used clay powder. I think that I try to check my emotion and senses through the texture and sense of the presence of sculptures, which made me feel a kind of white vitality.

PULSEThe theme which I’m working on now is “PULSE.” The rhythm and beat of our life is very personal. But, they get influence from an exterior environment, such as someone’s facial expression and words, wind and stones, and music, and unconsciously change. For example, you can feel a fast heat beat or feel relaxed. Since I have an image that an unconscious intention of life and dynamic progress of time in relation to the future, I wanted to express “PULSE” filled inside by static sculptures. 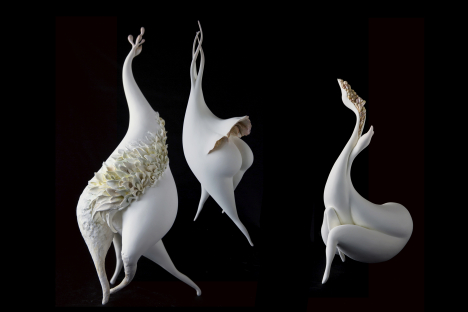 When I respond to the outside and change “PULSE,” I also give the influence back to someone. Such a system in which people and objects are related and affected by each other gives me a sense that everything is connected and becomes “like a huge life.” Subconscious “PULSE” in each person is also unconsciously related to another and in that huge life, it resonates and plays a complex, fragile, and energetic beat like an ensemble. Because I have an image, I’m making pieces for a hotel room of “ART NAGOYA 2017” as I imagine the “PULSE” of my pieces resonates with the viewer’s “PULSE.”

What was the trigger for starting a career in art?

When I was at school, I mainly created three-dimensional animation and films. After I graduated, I took part in various creative projects, such as advertising and promotion, animation for kids show, character design, graphic design, illustration, and film.

At that time, I used sculpture in film or photography. For example, I made unique attractive sculptures based on a story and the world. It was around 2012 when I started to think to make pieces which tell their background story and world, not sculptures of creature in photography and film. 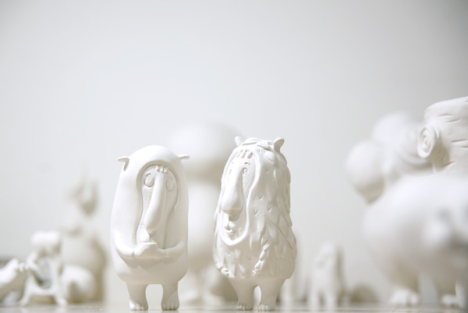 At first, in cooperation with a creative director who I worked together with at that time, I started to form static sculptures based on the relation of “story and world and creatures in them.” For example, “After Gooskanpi” is a series of story and world of my fantasy and I exhibited it at Karuizawa New Art Museum in 2013.

Since then, I have continued to work on these kinds of sculpture.