Figure of a future city floating in the sky. 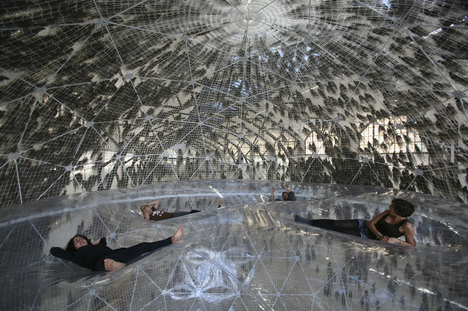 Tomás Saraceno‘s huge installation works are now in exhibit at Hamburger’s Bahnhof museum of contemporary Arts, in a hall that used to be utilized as a platform station. There are some kinds of floating balloons that look like soap bubbles. The space seems so fantastic such that it cannot ever happen in reality. However, these installation works let viewers think how the city is to be, by not drawing them into fantastic world, but into a real world. 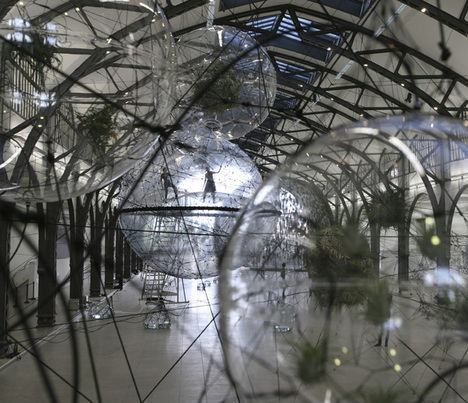 The exhibition called “Cloud Cities” exhibits installations like plastic balloons, balloons composed by plants, and balloons with tied up strings. Each balloon is named “bios fair” and has its own features, each with different required elements. For example, some balloons take in air plants, which can absorb nutrients from the atmosphere, not from earth. Others are covered with air plants. With this Tomás made up a floating plant that impresses viewers because he had made up the another earth .

In addition, another balloon is made by regularly tied up strings resembling a spider’s web, which creates us a surprising fact that simply strings tied up produce a complicated structure. Then, another huge balloon over 5meters in diameter is there, supported by a leaning ladder. Viewers can actually get inside the floating balloon, where they experience “special spac”e by physically jumping or lying on the floor inside. 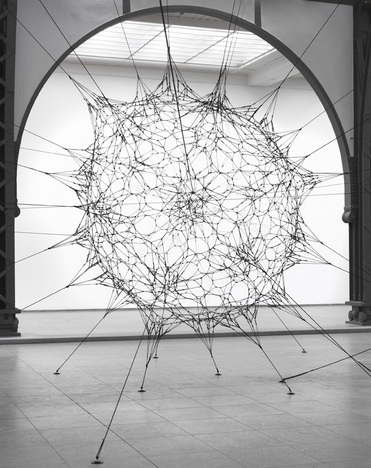 In this exhibition, Tomás Saraceno expressed special interest in architecture since he has studied Architecture and Arts in Germany and Argentina.

The title of the exhibition “Cloud Cities” means a future city in Saraceno’s imagination, where viewers can experience it as a city model. Making a city with clouds is kind of wild and meaningless, however, in his bios fairs the balloons are made on the basis of clouds that are mobile and free of gravity. Also, he proposes that each balloon also works with each other as the mass as if clouds are moving together or far away. In other words, people can live inside each bios fair.

On one hand hankering to the clouds, and on the other he accepts the earth as the biggest bios fair there is. He claims that the earth is gathering infinite tiny structures, and interacting between small and big structures. Actually, the huge balloons are separated into two sides, upper and lower. The lower side is filled with air, and at the upper side people are able to come inside the balloon. There, they can feel when one person moves and they will be awakened to the interaction which is passing each other’s moves to the others. He regards this interaction getting as a symbiosis element of the experience, and believes that this will play an important role in the city. 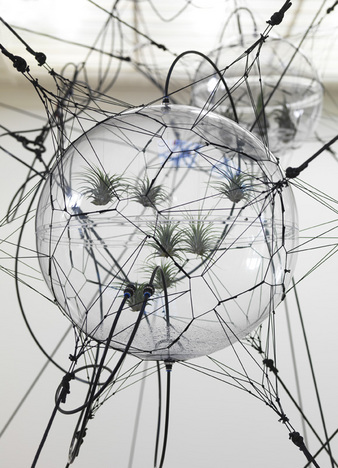 While “Cloud Cities” gives us a vision of city, it also tries to archive a practical and simplified structure of fixing reality. For instance, bios fair is producing a stable structure by taking into account the Weaire-Phelan structure, which is able to make maximum volume with minimum surface. Tomás noticed lithe and strong structure forms, and he wove strings around the hall.

Then, in the hall there were floating balloon works which were surrounded with strings, resembling soap bubbles caught by a web. In this way, we can understand Tomás Saraceno is always trying to get the latest artistic skills into his work, and he continues studying what to create for his ideal city. 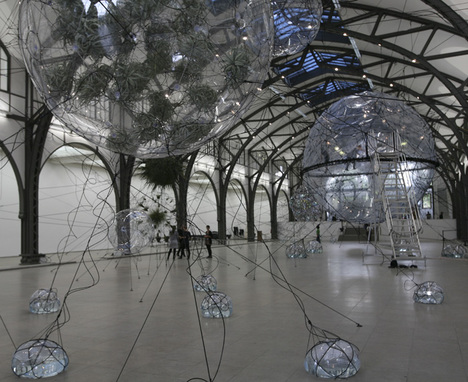 In the exhibition, a fantasy of the future has surely been presented to viewers through experience. Tomás  clearly showed a future city as one of an attraction that can be experienced. Longer lines at the entrance of the museum prove that the exhibition is a physically attractive one. There I read introductions in a leaflet that said that his future city is not fancy nor fantasy, but a city image that could exist in a real world.

However, I cannot stand to think that the city connecting to a real world can be exhibited only inside isolated and limited space like museums. Moreover, the futurecity only works in a non-conforming world such as museums or visions shared with others. Similarly, another exhibition at the same museum “8 Days in Japan and the Utopia of Eurasia” by Joseph Beuys, exaggerates the gap between Tomás’s works and a real world. Because Beuys once activated outside museums and tried to create a new society by establishing a political party and a college, under thoughts on “Social Sculpture”, from concept of sculpture. In comparison to Beuys activities, Saraceno’s works can be seen as kind of a fantasy far away from reality. Of course, I understand that Saraceno’s future city image is never empty delusion. Also I am sure that it gives a sensory strong experience, as well as common thoughts. That is the reason why I hope I could see his works in a real space, not inside the museum.