OUR MAGIC HOUR – How Much of the World Can We Know?

A triennial international art exhibition, the 4th Yokohama Triennale, kicked off at length from August 6th. It was also a favorite topic that both females, a general director, Ms. Eriko Osaka (a director at Yokohama Museum of Art), and an artistic director, Ms. Akiko Miki, lead the triennale for the first time in their 10 years history. 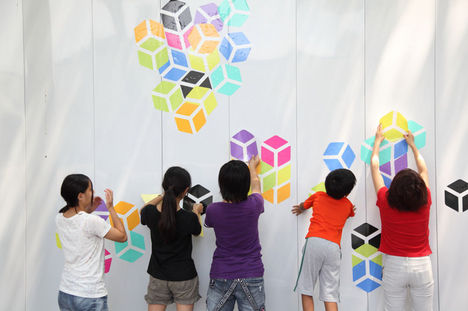 In addition to that, Yokohama Museum of Art was selected as a venue for the first time along with a previously utilized site, BankART Studio NYK (NYK Waterfront Warehouse), which attracted some attention. How much festive energies can they bring to the ordinary existing white cube as the international exhibition? 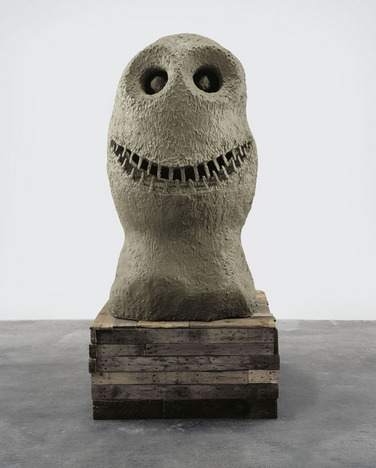 A theme for the triennale is “OUR MAGIC HOUR – How Much of the World Can We Know?” In the sense of art that leads people to a different world, there has been a common in 2nd “ Art Circus” and 3rd “Time Crevasse”. But this time, they featured about 300 pieces of magical, mysterious, and primitive works (77 artists/groups) for the show.

In order for viewers to decipher each works, there are concrete metaphors that were studded with various keywords to complement the main theme such as “Circle Sphere / Cycle”, “Ceremony”, “Alchemy”, “Dream”, “Visible / Invisible”, “Trance = Supernatural”, and so on. Each individual viewer is able to spin those keywords with any works and make his own stories freely.

Some of works include surrealism collections from Yokohama Museum of Art like Magritte and Ernst, Ukiyo-e that speaks beyond time and space, and Bikky Sunazawa from Hokkaido. Probably, it is intended to deepen the meaning of the theme by congesting those old and new piece of works in spite of about 9 hundred million Japanese yen for their budge which seems not a large amount to hold an international exhibition.

To begin with, 12 works by Ugo Rondinone (Switzerland/USA) are displayed on facade of Yokohama Museum of Art, which are featured in an official poster as well. Their unique features embodying animism and anime character have been attracting many kids. 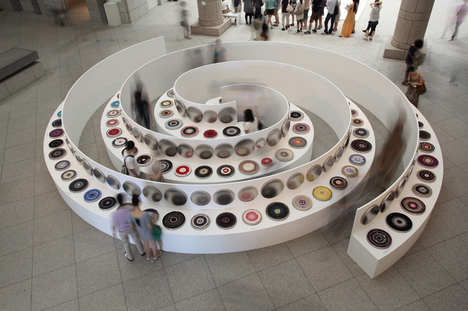 On a large-scale spiral podium right after the entrance, Yin Xiuzhen (China) exhibits her 108 pieces of round shape work made of undone garment. Going through an acrylic plastic maze, a visitor is able to listen to a voice of Yoko Ono (Japan/USA), who symbolizes a contemporary shaman. 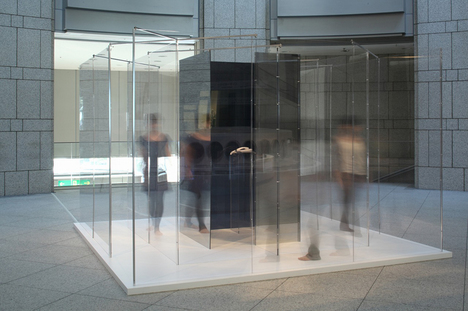 Any of these works nicely warm up a ritual atmosphere by making a difference from an ordinary museum exhibition and it gives a fairly well impression to get off to overall. The show is consisted of bringing each works closely in a space.

An admirable highlight is a combination of Ryan Gander’s (UK) arbitrarily placed 100 of crystal balls and a moving images of soap bubbles by Rivane Neuenschwander (Brazil). While walking between them, they become one piece of art and leave us an ever lasting lingering sensation. 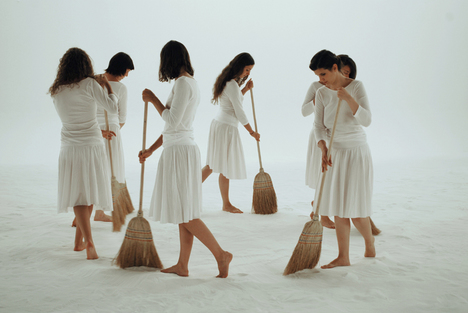 A visual art work by Mircea Cantor (Romania) “Tracking Happiness” is a piece that ladies in a pure white dress keep wiping off their foot prints while they are walking in a snow-white room. It can be interpreted as “Circle”, “Shrine Maiden”, and “Rite”. It also gives a strong consciousness of universal theme like creation and disappearance, and fruitless and eternity, at the same time, its visual beauty of the basic white tone attracts viewers. 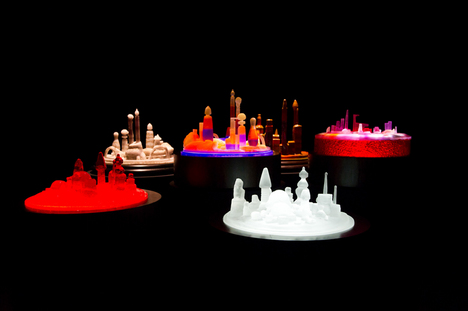 There are quite a few works that carry “beauties” with finality in the show. Unfun terrible from YBA, Damien Hirst (UK), brings his work that is reminiscent of stained glasses in a church, and even Mike Kelley, who is known for his grotesque works in LA art scene, exhibits his fictional space city of a wide variety of translucent objects. Nobuyoshi Araki, aka Arākī, displays not his renowned personal life like sexual representations but remained flowers in the tsunami-hit area, which is so beautiful without demur. 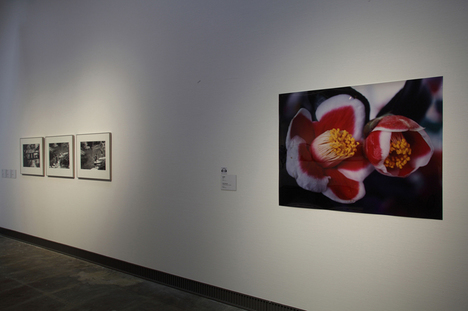 Probably, it is an aim to enable visitors who haven’t gotten familiar with a contemporary art to enjoy “the fine arts” straightforwardly. This sort of tendency toward the beauty can be witnessed in the other main venue, BankART Studio NYK.

A beautifully vivid visual experience is offered by Peter Coffin (USA) who creates an outer space by projecting perspective images of fruits. Sigalit Landau (Israel) appears in a picture with 500 of watermelons at the Dead Sea and she draws the state of things while gradually dissolving the formation in a music-like rhythm with remarkable sense of color. 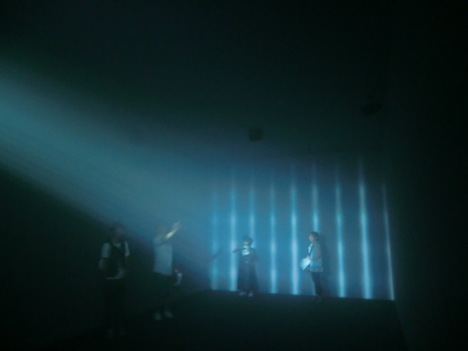 Moreover, Carsten Nicolai exhibits his light sculpture, “Fades”, whose radiated rays of light keeps changing into various form in a room filled with fine mists. Its simple devise shows a beauty of light as well as a high-pitched sound along with the light’s movement and it shakes viewer’s five senses. 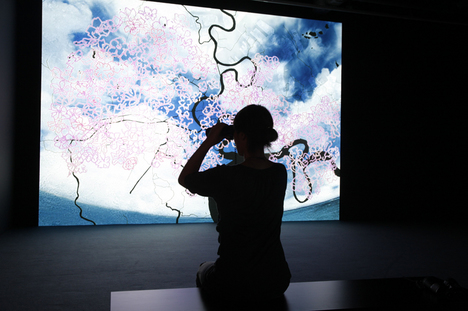 A beauty of a cherry blossom’s moving image drawn by Jun Nguyen-Hatsushiba stands out far floating on a map of Ho Chi Minh CIty and Yokohama City as it reveals that they are tracks where the artist himself, volunteers, and the directer, Ms. Osaka, have run praying for the future of Japan. 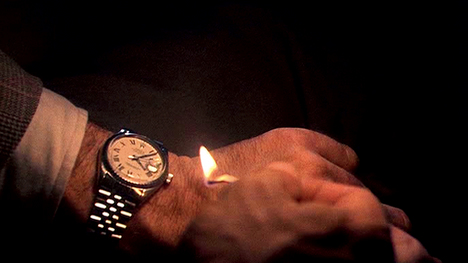 A masterpiece of the triennale is Christian Marclay (USA)’s “THe Clock”. It has won the Golden Lion at Venice Biennale and the hottest topic in the show as well. He extracted a scene that tells a time from the film of all ages and countries and he edited syncing it in real time continuously. A viewer’s life and a film’s story sync at the same time, which enables the viewer to experience lives changing stories. Many visitors remain staying at the site and the place always get crowded, however, this is the work you would keep enjoying for long. It is also a work that has a viewer cast his concept of “beauty” into “beauty” that each image embodies.

Most of art works for the Yokohama Triennale are these beautiful but small-sized rather than powerful spectacular installations this time. There are also a plenty of early works and directors curate closely throughout the show without failures, on the other hand, the entire show is not a little lacking in something appealing. 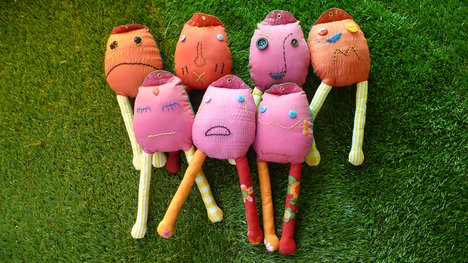 Since Yokohama City became a main host of the exhibition, it seems they try to make it one that citizens of Yokohama and Tokyo can easily make a trip frequently and enjoy by strengthening the bond with a local of Yokohama as well as the national grass-roots art activities cooperating with events like “BankART life Ⅲ” and “Kogane-cho Bazaar 2001”. The general director, Ms. Oasak, holds up “Raise” and “Link” besides “View” as their slogan. 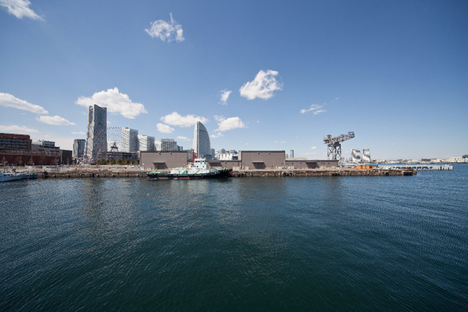 In addition to that, the characteristics of the Yokohama Triennale is to reflect a sense of disaster crisis, to feature Japanese young artists more, and to attempt an interlock among the artworks in various levels focusing on the theme rather than introducing a cutting-edge artist. It reminds a significance and an influence of a global international exhibition held locally.

The Yokohama Triennnale, that repeats trials and errors every time from nothing owing to unavoidable circumstances while keeps changing the operation, venues, and the director selection. Again, it suggests the future of an international exhibition from many different aspects.