LaContrie x colette
LaContrie for colette features offerings from this leather goods company consisting of a metro ticket holder, a single and dual card holder with an American pocket and a clutch with palladium buttons. Handmade in their store- studio on the rue de la Sourdière, these pieces celebrate French savoir-faire with a modern twist. 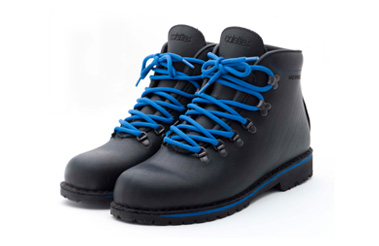 Merrell x colette
For their 30th anniversary, Merrell reissues an iconic 1981 model, the Wilderness and part of the meeting of the Parisian world of colette. Numbered and in limited edition of 30 copies, the model shoe combines authentic design and unique comfort. Happy trails!

Chevignon x colette
The iconic jacket of the 90s returns in a deluxe version exclusive for colette: Midnight Blue, in genuine crocodile leather (from breeding farms in Louisiana) for the first time, and with a gray reflective patch to be visible all night long. Limited edition of 12 copies.

Kuoni No.1
Kuoni and Thomas Erber present Kuoni No.1 – The ultimate travel bag by van Astyn designed by Thomas Erber and Peter Nitz. Limited to only 20 copies, it will be sold exclusively at colette and Kuoni Concierge in Zurich. This is the first piece in a collection of objects for luxury travelers. To be continued.