“Too Far to See” is an exhibit at Yokohama Museum of Art by contemporary artist Tadasu Takamine. As Eriko Kimura, the show’s curator, explains, the title of this exhibition suggests that “the word ‘Far’ includes psychological distance and the sense of distance that comes from the difference in languages, as well as actual physical distance. Similarly, ‘See’ does not simply refer to the sense of sight, but also to the abilities of comprehension and understanding that also includes communicating with others.” Through a variety of works, Takamine’s exhibit seems to pose several questions to the show’s visitors. 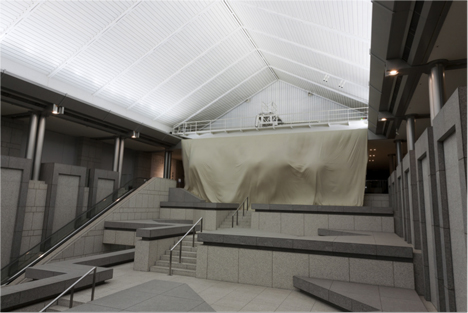 The exhibit begins with the installation entitled “Wilderness within.” Ghost-like howls from this large installation piece echo through the museum. 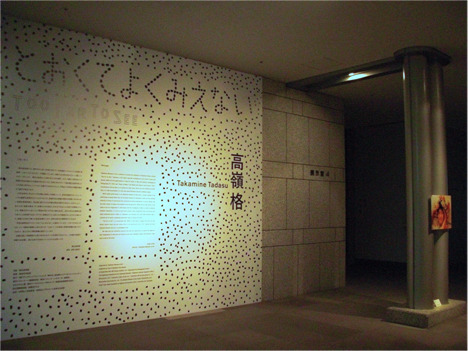 The second piece, “Kimura-san,” is displayed with a message from the museum’s director, Eriko Osaka. The director’s introduction explains that a video piece, also titled “Kimura-san,” was not shown at a previously held 2004 exhibit at the same museum. These works are based on the real “Kimura-san,” a performing artist with physical disabilities from the Morinaga milk arsenic poisoning incident of 1955, and for whom Takamine had previously home-cared. The original video, which included sexual content, was excluded from the 2004 exhibit due to legal considerations. In light of the past history between the artist and the museum, this time, the exhibition begins with a photo of “Kimura-san.” 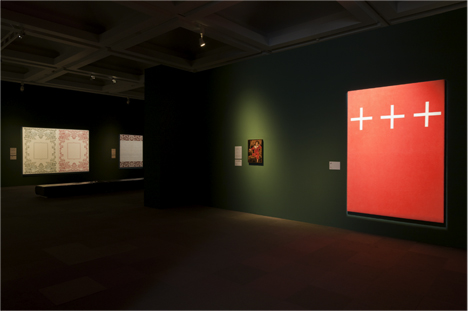 Visitors next enter the “Green Hall.” There, 21 flat pieces are on display accompanied by explanations of each work along with their titles. These pieces, however, are all everyday objects like blankets and embroideries the artist found at flea markets. This is a playful room that highlights the notion of “museums as places that can explain anything.” The dramatic lighting accentuates this impression of museums as explanatory places for presentation. Contrasting starkly, the two pieces near the hall’s exit are enigmatic. One is a frame made of green clay. On an opposite wall is an elaborate vine-like relief sprawling across the wall, also made of green clay. 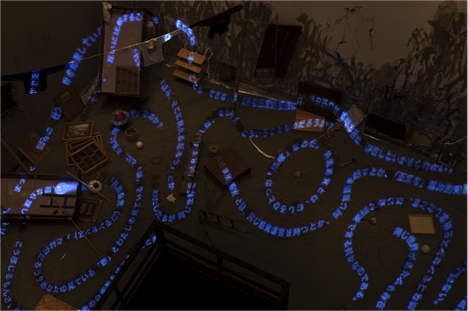 A dark room, where the piece “A Big Blow-job” unfolds, awaits next. Theme-park-like music leads visitors up a slight incline to the top of a stage in the dark space. From there, the entire square room can be surveyed, but only glimpses are actually visible. Throughout the room, several spotlights chase letters written across the floor and walls, revealing phrases like, “are the red that you see and the red that I see the same red?” which is the opening line of aesthetician Hiroshi Yoshioka’s text, “LEAP FOR COMMON SENSE.” The lighting also sheds light on various objects from the heaps of sand that cover the floor and T-shirts hung on string. Perhaps it is this sense that the room cannot be completely grasped, which stops visitors in this space. 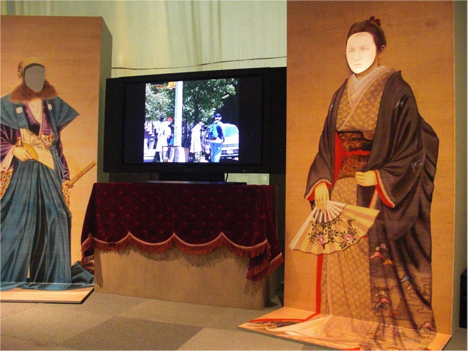 For “Sympathetic Trade,” the video installation that follows, two panels of men wearing kimonos are on both sides of the monitor. The video features the artist himself spending a sunny day repeatedly trading his clothes with garments sold on the streets of New York City, his men’s clothes gradually turn into a woman’s outfit. The sporadic dialogue coming from the two kimono-clad panels sometimes corresponds to the image playing on the screen. And at other times, the words seem to be completely random.

And, again, another large room follows. Six pieces are on exhibit here, including three video installations, photographs, calligraphy, and a sculpture.

The first video piece is titled, “Do what you want if you want as you want.” It shows footage, split on three different screens, of a Palestinian woman, whom the artist refers to as his friend, relating her experience of witnessing the actions of the Israeli Army in Palestine. The woman’s words, translated into Japanese, run across a digital display. However, it is not the woman’s loud appeals regarding Palestine and Israel, but the meaning of a “friend” that seems to be questioned here. 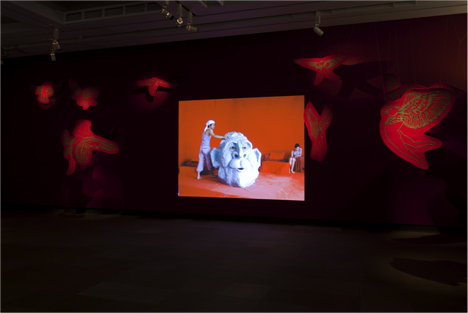 The second piece, “God Bless America,” features a man and a woman spending three weeks working on a gigantic claymation piece in a red room. The large clump of clay first appears as a man’s face and gradually transforms. As if the clay lump does not exist in the room, the couple carries on with their lives in the same chamber. And throughout all this, the eponymous song “God bless America” plays. 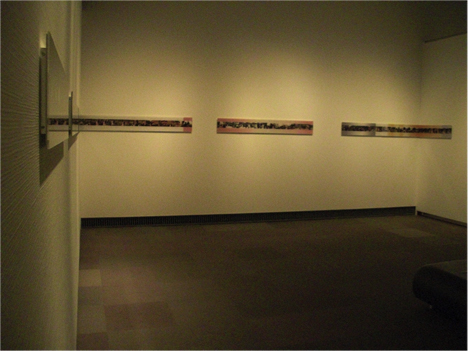 The next piece, “Baby Insa-dong,” is a combination of words, photographs, and a video featuring the artist and his ethnic Korean wife. The couple’s romantic relationship and the artist’s feelings are narrated throughout this piece.

On the other side of “Baby Insa-dong” are three hanging scrolls of “Korean Studies.” The artist traveled to South Korea to write these Korean calligraphy pieces, and a Korean calligrapher made corrections on them with red ink.

Two three dimensional works in a glass case come next. “I.T.” is a green-skinned head of a monkey or human-like being, and “A.I.” is a small sculpture. Inside a glass pot, “A.I.” was originally a beehive that happened to form in a block of concrete. 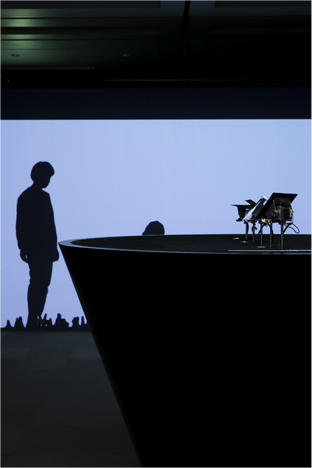 “Too Far to See” 2011 Exhibit at Yokohama Museum of Art. Photo: Tomoki Imai

Finally, there is a neon “welcome” sign closing the exhibition, and also marking the entrance to the show’s last piece, “Too Far to See,” which is another video installation in a dark room. The large screen at the front of the room displays shadow images of men and women sucking on ceramic objects placed on the ground. This work was developed after a two-day workshop (five hours each day), led by the artist on the sexual act of fellatio. In the last scene of this video piece, men and women standing on what appears to be the rooftop of a building, proudly hold these ceramic figures.

Outside this dark room with the video screen, the ceramic objects made during the workshop are on display, and the poem that was narrated in different languages inside the dark room is handwritten on a dark wall.

By the end of this exhibition, it feels as if one had gone through various experiences. The sound emanating from the first exhibition piece, “Wilderness within,” is an actual recording of the artist’s wife in labor pains. With a large cream-colored fabric billowing as if air is strongly blown into it, the energy this piece holds could be a reenactment of childbirth. “Too Far to See” seems to present the workings of an art museum, the relationship with a Palestinian friend, the place the US holds within our daily life, and the intimacy with a Korean ethnic wife, while allowing us to experience all this as well.