The exhibit, Get It Louder 2010, was opened based on the theme of “sharism.” The main point of this exhibit that started in 2005 was to create excitement among young and spirited Chinese creators. This exhibit gathers mainly young creators who are active in the areas of design, film, music and art. This year, there were more than one hundred participants from inside and outside of China. Moreover, there was the very first entry from the field of literature. The exhibit was held at Sanlitun Soho in Beijing from September 19th to October 10th, then moved to 800show in Shanghai from October 22nd to November 7th. 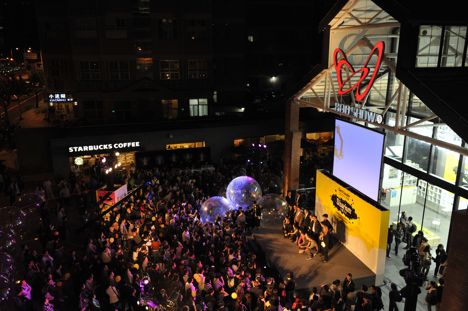 Get It Louder 2010, Shanghai venue

“Sharism.” The process of creation should not be a straight line. It is like creating a snowman. Creators gather information and knowledge from the surrounding environment and make the idea bigger and bigger. Sharing information and knowledge is profitable for people. We can also expect the development of knowledge and skills from this act. Moreover, the decision to share is always left up to people. Currently, since people insist on claiming their own property rights and ownership, it is hard for people to share. Sharism is an idea to break this current situation and develop people. 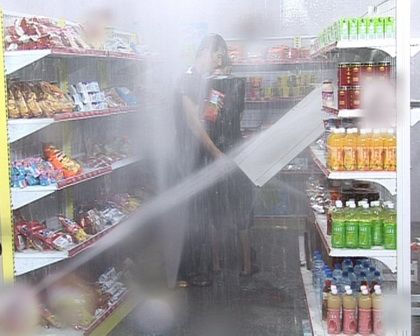 An artist, Zhang Liaoyuan, who was born in the late 80’s created the visual art of “Titanic.” A library, supermarket, and hotel provide the surroundings for these three scenes. All of a sudden, a strong drainage happens like the one that happened inside of the luxurious submerged passenger boat “Titanic.” While the strong drainage is happening, people are behaving ordinarily, without noticing the water. There are always accidents, incidents and disasters happening all over the world. However, no matter what happens outside, we, individuals, keep leading our normal lives. This could be viewed as a strength of the people, or as the indifference of the young generation towards society and others. 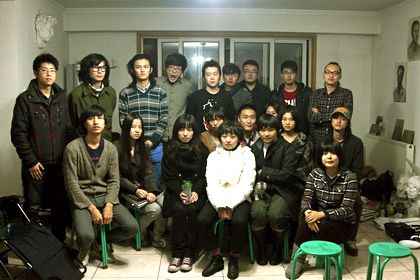 “A series of nine three-minute stories.” Each member creates a story based on the same theme. They are a young group of artists in Beijing. They have been showing their films underground since May 2009. They always have a set theme and each creates a three-minute long story. Previous themes have been “a heart broken,” “remark,” and “community.” Get It Louder 2010 is their first public appearance. 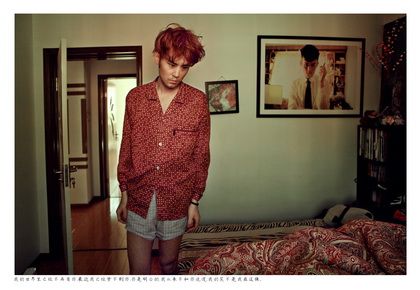 Han Chao had a series of pictures entitled “Boyfriend.” A photographer, Han Chao, has been keeping records of his own life style and young people around him from 2005 to the present. Although they look strange, their world is very colorful. His pictures show the beauty of Yanyan, gentleness of Gigi, pureness of Lixia, the obedience and childlike nature of Mingming, and the girly charm of Duoduo. Audiences fearfully peek into the world through Chao’s eyes. 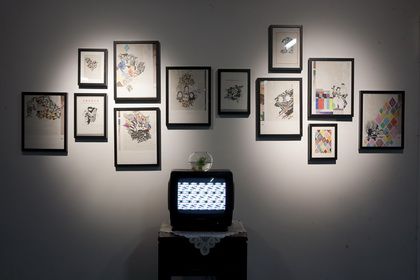 The animation “Story” was created by a father and son, Jiaqi Lei and Ray Lei. Ray Lei is a young designer who also does works for Nike and Microsoft besides his own creation. His father, Jiaqi Lei is a famous book designer. The family tree that was written by his ancestors gave Ray Lei the idea of sharing stories between himself and his father by drawing. His father draws the family with a ballpoint pen and Ray Lei colors it in as if he were a child playing. 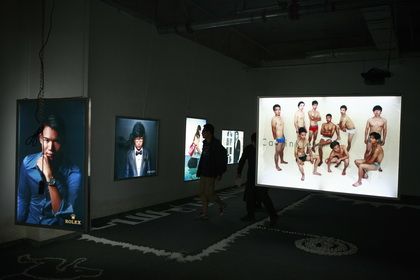 They are a group of young people with the morale of a team who shares the same language from the 80’s. Sometime, understanding adults will warn them, yet they still go out and cause trouble. That is what Double Flying Group shows in their films, performance and installation art. At Get It Louder 2010, they present an advertisement that they produced and acted in themselves using images of famous brands. Moreover, they are also showing a self-produced music video, “Contemporary business.” This video should arouse sympathy from many young artists. “An exhibit is not something that you can do that soon, no matter how much you want to.” 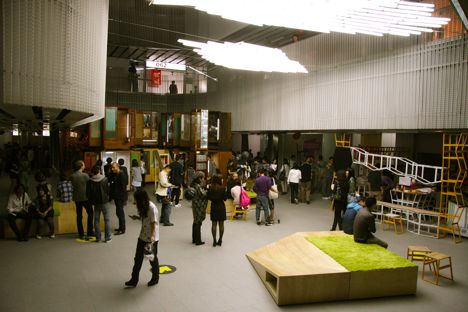 Get It Louder 2010, Beijing Sanlitun SOHO

Although there are big name artists, such as Ai Weiwei who is an influential figure in the art industry and Sun Xun who has been awarded many art prizes, many fresh up and coming creators participate in this exhibit. People believe that they are the next generation who will be responsible for China’s creative industry.