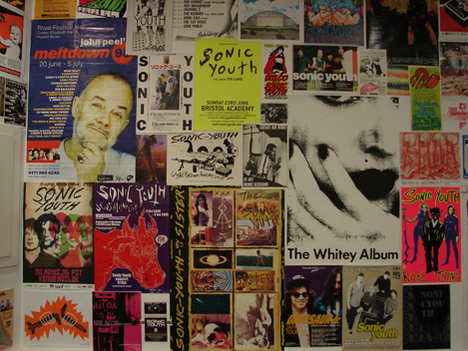 Since the formation of the band in early 1981 Sonic Youth has being involved in a multidisciplinary universe surrounded not just by the most experimental music scene but have been into conceptual art, photography, cinema and design. The band’s interest in marginal underground movements has been influenced by the punk scene aesthetic, no wave rude representation and the Beat poetry. 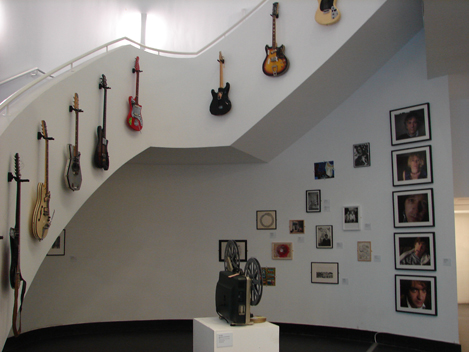 So to dive into Sonic Youth’s 20 year History is to get immersed in an huge universe of collaborations and experimentation in the fields of contemporary arts and culture. Now with the help of curator Roland Groenenboom the band present an incredible selection of unique Sonic “parafernalia” including pósters, flyers, album covers, drawings, lyrics, music gear, (this referring to the band’s objects and material. But the exhibition presented the work of more than 30 of the most influential contemporary artists in different fields including: Vito Acconci, Dan Graham,Glenn Branca, John Cage, William S. Burroughs, Isa Genzken, Allen Ginsberg, Stefano Giovannini, Tomoo Gokita, Todd Haynes, George Maciunas, Gerard Malanga, Malleus, Christian Marclay, Dave Markey, Paul McCarthy, Raymond Pettibon, Edwin Pouncey (a.k.a. Savage Pencil), Richard Prince, Cindy Sherman, Patti Smith, Sun Ra, Dennis Tyfus, Alan Vega, Jeff Wall,Joshua White, John Wieners, Christopher Wool, Shinya Yamamoto, Nate Young, all about 150 artists some of whom are really unknown in big museums, to show the close relationship between the band and their interest to be in touch with the international contemporary culture surrounding them. 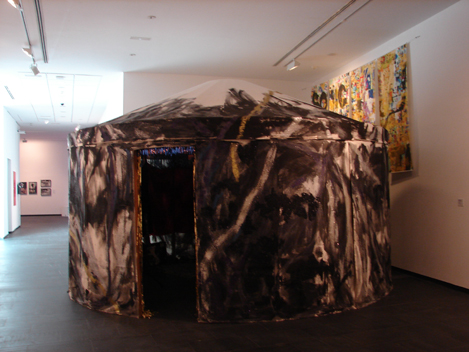 One of the biggest installation in the exhibition is the Pabilion created for the show by Dan Graham (mirror Pabilion) in which the whole discography of the band is presented with rare live performances videos form the band as well some videos from the lates 70`s and early 80`s realized by Graham. Also really significant to watch is the pictures of the band by artists such as James Welling, Sofia Coppola, and Richard Kern. 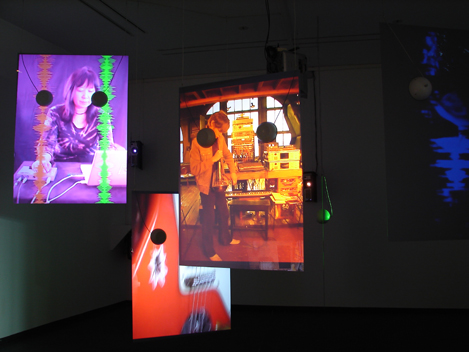 The members of Sonic Youth itself have made more than music. Kim Gordon bassist of the band has collaborated with the prestigious ArtForum Magazine writing essays about art and music and exhibit his personal work in galleries around the world. Lee Ranaldo was trained as a visual artist but was playing in several bands before joined Sonic Youth. Thurston Moore and Steve Shelley have their parallel project that includes independent record labels “Ecstatic Peace” and “Smells Like Records” that brings out a great supply of radical unique music. 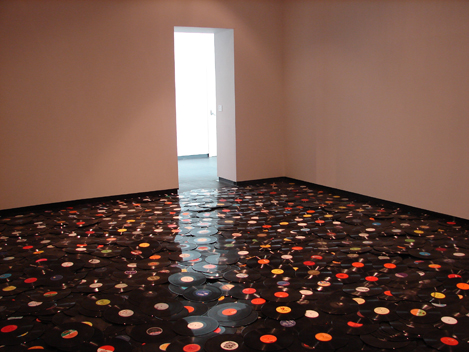 The exhibition is complete with a special catalogue that includes articles, interviews, images, material from the band over the years and 2 vinyl disc with recordings from each member of the band. 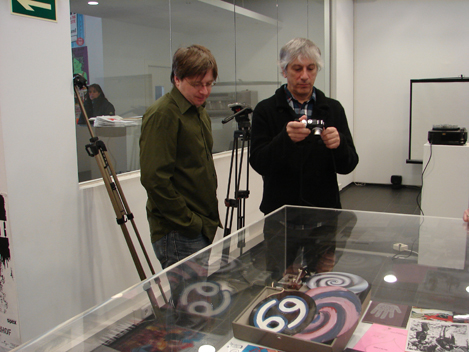 The two members of the band Lee Ranaldo and Steve Shelley and the Curator were present in Madrid for introduce the exhibition.
The Centro 2 de Mayo have made a great effort to present the exhibition and the final result is excellent. The art centre also will present various parallel activities centred around Sonic Youth and experimental music, such as workshops for children, special cinema presentations and a pair of concerts curated by Sonic Youth presenting Bestia Ferida and Macromassa.