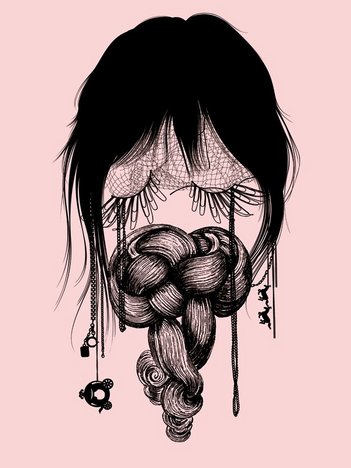 Jules Julien is an artist and illustrator, works in Paris, who was born in 1975.
After working as a freelance art director, he started making art work, mainly drawing and design, since 2006. His works appear in lots of magazines in Europe, America and Australia, and many media and galleries are interested in him. Nowadays, he joined the exhibition at Gallery Margalef ＆ Gipponi and Gallery Antebellum.
Then, his first exhibition in Japan is held at the DIESEL DENIM GALLERY AOYAMA in Tokyo, called CADAVRES EXQUIS. I interviewed him just before its opening.

Please tell us how you feel about your first exhibition in Japan.

I am really glad to do this. This is the third time for me to come to Japan. I am so exited to have my exhibition. I love Japanese culture.

Could you let us know what you like about Japanese culture?

For instance, the musicians, Asa-Chang&Junrei, the writers, Haruki Murakami, Yoko Ogawa and Soseki Natsume. Also, I like Manga, especially, “PingPong” and “Tekkonkinkreet” by Taiyo Matsumoto. 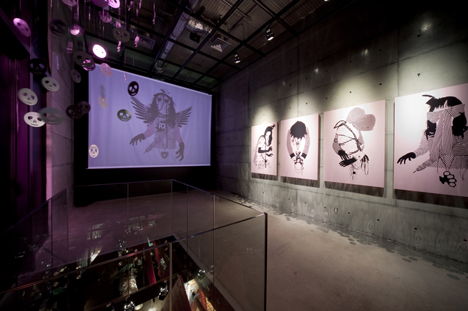 The theme of this exhibition is “Tokyo today”. What do you think about Tokyo fashion?

Comparing Tokyo and Paris, Tokyo is the city people play with fashion. They wear colourful clothes and many goods as it is very uncommon in Paris. On the other hand, there is uniform culture in Japan. I saw lots of people wearing school uniform or suits. Tokyo has two aspects of culture in which people are freely enjoying fashion and unifying in their uniform. It is interesting. 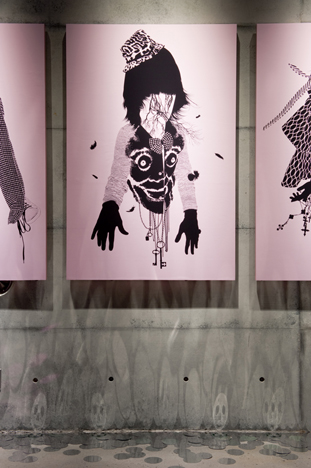 The pictures in pink and black are new work for this exhibition, I heard. Please let us know the concept of your work.

There are three main concepts. The first is “play”. As the title of the exhibition is “CADAVRES EXQUIS”, I arranged “le cadavre exquis” -a popular play at the time of surrealism- to my style. The second is “the mode”. It refers to a circle in fashion industry that continues forever. “The mode” in magazines influence street, and street fashion also influences fashion stylists and editors. You will see that in the pictures shown on the screen in front of the big window. The continuously changing silhouette implys this eternal fashion circle. The last one is “death body”. People sometimes look like mind-less dead bodies because of the excessive style made up by themselves. It is expressed by unknown doll-like figures without faces. I would like to draw ambiguousness of fashion, both gorgeous and transient.