The third edition of the annual Art Dubai festival opened its doors at the popular Arabic-style entertainment complex Madinat Jumeirah.

The art installations gathered for this world-class art event were as many as 2000, by 400 artists, from 68 galleries all around the world. The event was so large, that art displays spilled out of the large Madinat amphitheatre and flowed onto a neighbouring beach and parking area. 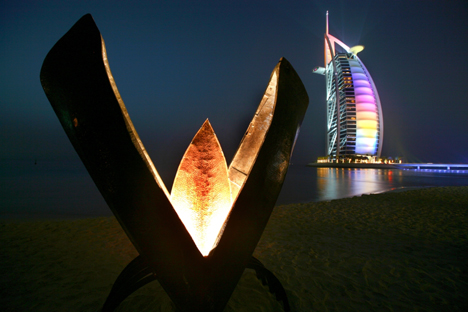 The sponsors of the art fair, Abraaj Capital, gave prizes to three pairs of curators and artists. There prize given to these three art works were 20 million yen each. This prize can be the world most generous, given that the well-known Turner prize in the UK is six million yen. Despite the depression of the world economic crisis all over the world, the amount of capital behind the awards is surprising. Some artists have questioned the ethics of giving such a large amount of money. One prize winning artist told the Abu Dhabi-based newspaper The National: “I was talking to a painter friend of mine recently, whose prices recently went up beyond his imagination. Now he says that he cannot make a single stroke of the brush without thinking about money and that it is having a negative effect on him.” This prize was created to support emerging artists from the Middle East, North Africa and South Asia region. One of the award winning pieces is “Walk the Sky, Pisces” by Russian Algerian artist Zoulikha Bouabdellah and American curator Carole Solomon. 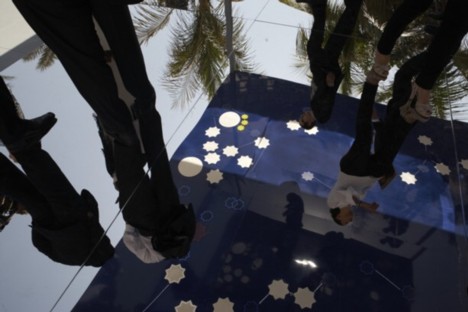 You can freely walk on their art piece. Stepping on the mirror board on the floor with reflection of constellation lights makes you feel like walking on a sheet of glass high up in the night sky.
Two polygonal stars also designed in this project are symbolic of God’s creation in long back in Arabic history. “Who never wanted to walk on the sky?” Bouabdellah laughs in an interview with The National. This project was inspired by a common dream of flying, as well as the artist’s roots in Arabic culture. Bouabdellah also said that the polygonal shapes represent civilisation as a melting pot of many different things.

As an opening event of Art Dubai, a workshop called START invited students from local schools to film making class, a debate on art and a free drawing project on a massive canvas.

However, Dubai still has a long way to go before an underground arts and culture movement begins to take shape. Projects like START stimulate the creativity of local students and help to bring future artists. ‘START uses art to enrich education for children in the Middle East.’ said Sonia Brewin, Director of START. ‘START and Barclays Wealth are making Art Dubai more accessible to new audiences, particularly Emirati families and young people with special needs,’ she added.