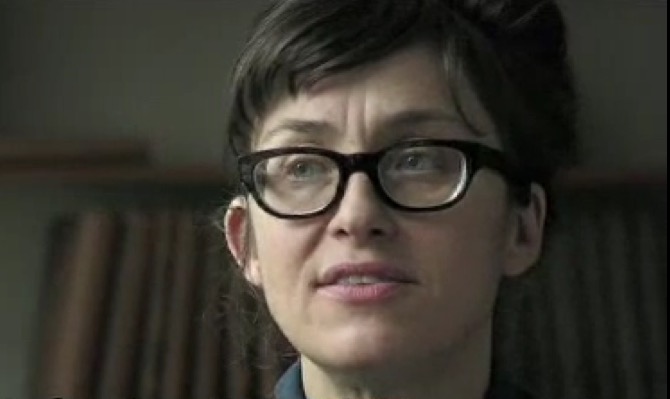 As a teenager, Elisabeth Charlotte Rist, born in Grabs (Switzerland) on 21 June 1962, decides to change her name. And thus it is Pipilotti Rist – being a combination of Lotti (her own nickname) and Pippi (the name of the heroine from Astrid Lindgren’s famous Pippi Longstocking books) – who starts to study commercial art, illustration and photography at the Institute of Applied Arts in Vienna and then audiovisual communications at the School of Design in Basel.

At the beginning of the eighties, Pipilotti begins to experiment with super-8 films and slide projections as stage design for several bands. From 1988 to 1994 she is a member of the popular punkband Les Reines Prochaines. Music and pop culture continue to play an important role in her work. Rist provides her own personal spin on the seductive imagery of television, films, music films and the experimental language of video art. Her video works are shown in museums, at biennales and festivals, on television, and in public spaces such as Times Square in New York in 2000.

Pipilotti Rist and her team make large installations since the mid-1990s. The video imagery, the soundtracks and the experience of space have an equivalent role in her work. Her longstanding collaboration with the composer Anders Guggisberg produces a highly personal and recognizable sound.

Elixir in Museum Boijmans van Beuningen (Rotterdam, The Netherlands) is the first major survey of Rist’s recent installations. It is a ‘Gesamtkunstwerk’, comprising nine installations. The exhibition’s floor plan resembles a living being, with a stomach, heart and lungs; a video organism that has grown organically from Rist’s lively oeuvre.

Some of the installations in Elixir have been shown previously in another form in other locations. In 2007 ‘A la belle étoile’ filled the enormous plaza in front of the Centre Pompidou in Paris. ‘Homo Sapiens Sapiens’ was made for the vaulted ceiling of the church of San Stae in Venice in 2005. By fusing the individual works Pipilotti Rist has transformed the museum into a place for extraordinary experiences and encounters.

In this interview Pipilotti Rist talks about colour, the beautiful landscapes behind the lids of one’s eye, the naked female body, the role of museums in our society and the role of art in our personal lives.