Hong Kong creative group Graphic Airlines has been flying around the city to spread their love of design. With a wide range of works and being unbelievably active in a variety of projects, their name has grown significantly within the last few years. Not to mention the iconic fat face character has to be credited for their recognition. This young pair will head to Paris next year for their exhibition. Good luck and enjoy the voyage! 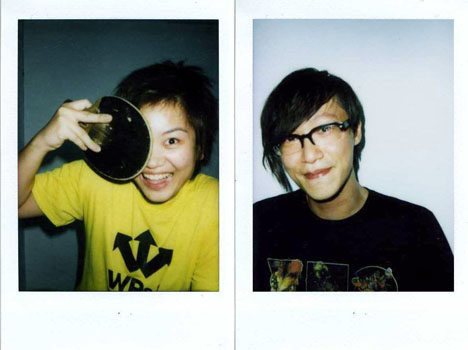 Please tell us about Graphic Airlines and what is the background of this pair of artists?

Tat: I started Graphic Airlines through a website in 2002. At that time, I was looking for a space to express my own design and drawing apart from my boring office design work.

Vi: I was influenced by Tat and started to do some doodles and clay dolls, so I joined Graphic Airlines from 2004. In 2005, we started to stick some hand drawing stickers in the street and we found this new way to express Graphic Airlines. 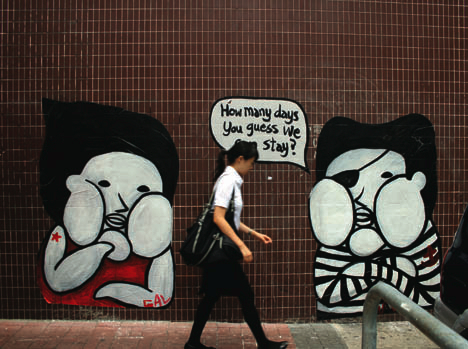 You two have been very active in the art scene for a couple years now, could you name a few projects that you liked the most? Please briefly tell us about them.

The most memorable project is the release of our first graphic novel “Trash Talk” in 2006; this seems to be one of our starting points to let people know about us. It contained some of our earliest works. I love that most of them are so raw and unpolished.

Other than “Trash Talk”, we also like the project called “Expanding City”. We wanted to do something big on the street instead of painting for this project, so we made two giant plushies and put them on the street. We took them traveling around Hong Kong and took pictures of them in different scenarios. The pictures all showed the high density of this city. It wasn’t easy to move these two plushies around the crowded streets, because they were over 100 pounds each. On the other hand, it was really interesting to see how people react to such a strange thing on the street. 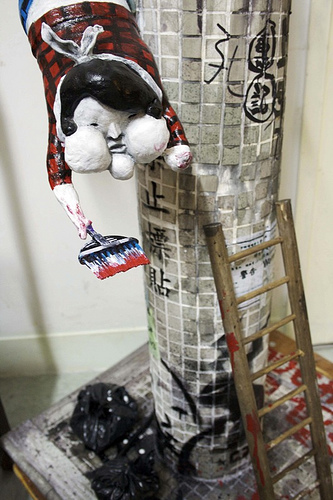 As a team, how do you create an art piece together? What is the creative process?

We have discussions on every project and we share all the ideas and sketches. We would come up with a basic idea before starting work on the piece. Usually, Tat works more on the digital side, whilst I work on handmade part.

You two have been working with different forms of art: street, figure, comic, animation, etc…which form you enjoy the most and why?

We enjoy doing street arts most because we can directly communicate and interact with the civilians on the street with this form of art. Also, our work can appear in different locations attracting unexpected responses. Our work may be cleaned up quickly or covered up with a new work, which is done by other street artists or even merged with their new work. We think this is a very interesting thing to see.

Vi, the fat cheek character has become your signature, how did you first get your inspiration to create this unique character?

I first came up with an idea of creating a human character that looks empty and a bit sad. They weren’t meant to be that fat in the beginning, but they became fatter and fatter afterwards, I guess the character is a bit like me, haha…

Actually, behind those fat characters is the meaning of “expanding”. We always want to expand everything, expanding our wealth and our powers, building tall buildings in the city, buying too much and wasting too much at the same time. I want to express greediness through the characters. 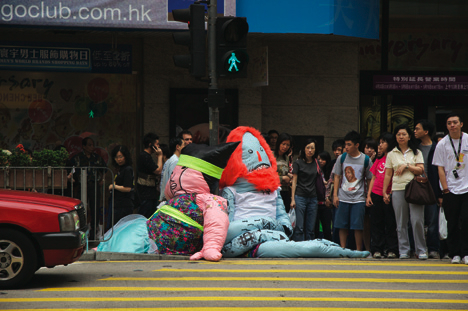 Tat, when you introduce yourself on your website, it says “totally from Hong Kong”, do you consider yourself as one of the hard-core local people? And what do you love about Hong Kong?

I don’t think I am a hard-core local people, but the fact is I grew up in Hong Kong, and this city is my home, so what is happening in here will inspire my artworks. I think I have a love-and-hate relationship with this city. I love that you can find shops and food you want very easily in Hong Kong. However, there are more and more people living here, it’s getting too crowded to walk in the street. 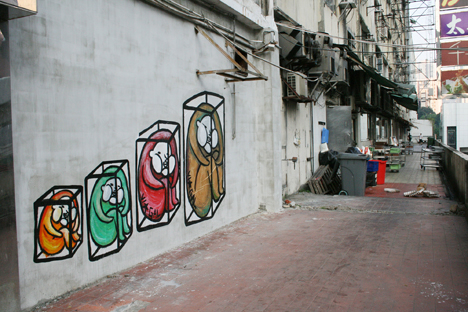 You two are local street artists, what do you think about graffiti culture in this city?

I think Hong Kong’s street art and graffiti scene is not as good as the other Asia cities. Not many artists are active in this scene and Hong Kong has been molded as a “clean and tidy” city, so the works that we do are easily cleaned up.

Please share with us your favorite place in Hong Kong and why do you like this place in particular.

It’s the old airport across Kowloon Bay and Kowloon City. Ever since the airport has moved to Lantau Island, it has left a big empty space in Kowloon City. We enjoy riding in the car around that area.

How do you balance your life and your creative career together?

There is no balance at all. Our life is our creative career, but we enjoy it!

Working on any project at the moment? Please tell us about it.

At this moment, we are preparing a trip to Paris from Jan to Feb. We are going to have a live painting in Maison & Objet fair and we will have our first small exhibition in Paris.

Last but not least, do you have any advice for the teenagers who would like to pursue art?