Ly draws fantastic creatures which live in her inner world. The characteristic of her drawing is transient view of the world. Freakish creatures with horns, and penis-shaped creatures…these creatures were born, multiplied, and disappeared gradually. Apparently, her work represents her view of life & death, and sex. Moreover, it also includes some hidden messages such as her desire to associate with the borders of sex, or communications gap in current society. 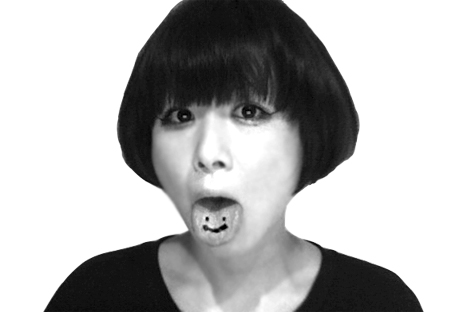 I’m a monochrome artist, Ly.
Born in Tokyo in 1981. I draw with black and white. 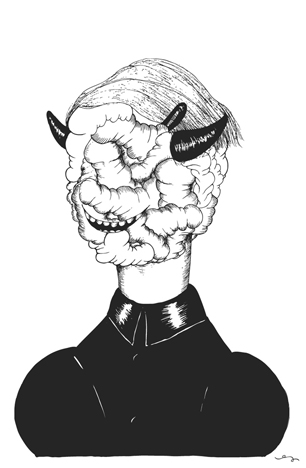 “A goblin with a blank featureless face in my dream”

Currently, you are working as a monochrome artist. How did you reach to the monochromatic world?

I’m not sure how, but the current style is established naturally. Black color has been standing out in my life. When I look back over the past, I can notice some features why I established monochromatic style.

I’m attached to black than white, because my room was all black since I was a child (my uncle is an architect…that’s why). The wall, desk…everything was black. The window was big, but it’s decorated only with a silver blind. When I think of it now, it was a stylish room. However, I wasn’t get used to the cave-like room at that time. My friends used to surprised at my room when I invited them. I had been drawing and studying in such a black room. There was black color in my sight all the time. Therefore, black became the color which make me calm naturally.
Also, I have been using a black pen to draw since I was a kid. I used to draw all the time with a black pen and paper. Even the coloring books, I used to color with only two colors.

Most of Japanese girls in kindergarten and elementary school have red personal belongings such as painting tool bags and calligraphy bags. But I had them with black color like boys had because my mom did not like red color.
When I was in elementary school, I started to noticed that only white can go with my favorite color “black” while I was drawing with many colors in the drawing class.

Then, I started to create work using only black and white from my late teenage. It was influenced by what I felt when I was a child. 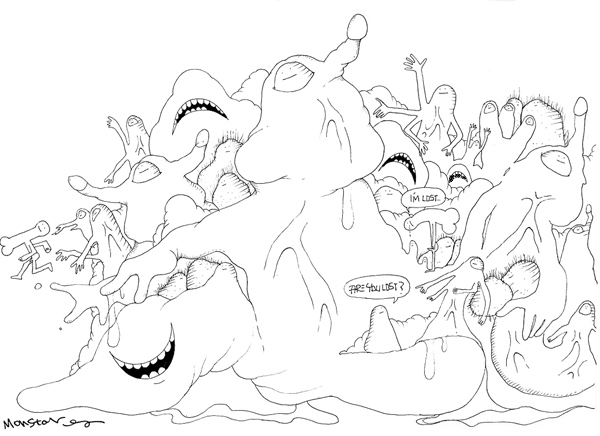 “Buku-buku in my memory”

I heard that your characters are living in your inner world. Could you describe the world? Also, how did you start to use penis as a main motif?

My inner world is totally fantasy. It’s also influenced by my childhood memory. When I was a child, I was given to daydreaming. I used to daydreamed that there was something living in the tree, or there was someone when I looked back, and there was some kind of creatures at the corner of room, so on so on. While I was daydreaming, I made up the world of creature in my mind. I had been training to fertilize imagination. When I was not drawing, I imagined till I could see.

I draw a penis as a motif because I don’t like it mentally, but I like the shape. Also, I got a funny story from my parents. They said I used to tell my parents “Somebody told me to eat the thumb-sized sausage when I was in my mom’s tummy. But I gave it to a baby behind me because I didn’t want to eat.” After that, I got a younger brother. That’s why my parents said our genders supposed to be opposite, so I draw a penis to seek which I don’t have…I’m not sure though.

Moreover, seeing Cocteau’s painting with a penis made an impact on me too. I used to copy it and draw. As I draw some creatures, drawing a penis is nothing different to me. However, I couldn’t show them to people when I was a junior high or high school student. For the last six or seven years. I became able to show my drawings with penis shamelessly. Because I like to draw spongy creature, so drawing such a weird creature, penis, is natural to me. 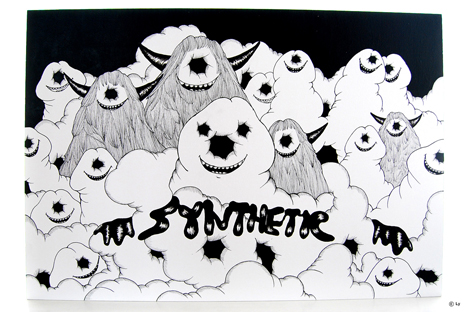 I felt that the characters form groups or get together in your most of work. Is this related to your concept describing in your homepage, “The desire to associate with the borders of sex, or communications gap in current society”?

A person, who understand my drawings, my creature, my world, and myself, wrote the sentence for my homepage, I thinks it is related. Actually, I just noticed that I have a lot of drawings which the characters form group! The reason is there are a lot of creature surrounding myself in my inner world, and they start to appear one after another in my drawing. That’s why the characters get together in most of my work. I can not stop my pen while I draw, because the group of character keep expanding. In my world, there is no borders and no chronic communication gap. However, the current society is a little difficult for me. It might be my desire to associate with it as I do in my world.

I read your blog. I love the cuteness of tale-like title and sentence. Do you also think some tales when you draw?

My blog is almost my fantasy diary or dream diary. As I draw and daydream a lot, it influenced my dream directly. So, the dreams I have are amazing. When I draw, the story comes up at the same time. But it’s a story and a thought about each creatures, so it’s not a complete story.

In what kind of environment do you think about and draw your work?

I can draw calmly in my room. I’m not the type of the artists who thinks and draws. After I start to draw, I draw a lot. Or I sketch the things I daydreamed wherever I am. 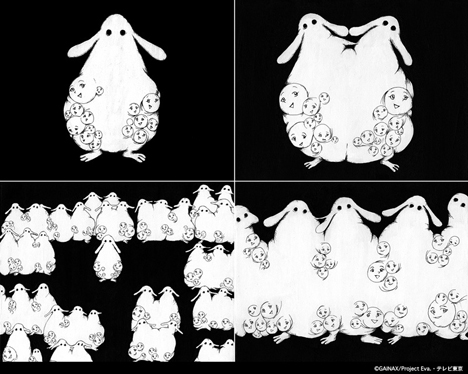 WHAT DO YOU WISH? (EVA AT WORK)

What is the most impressive thing among the jobs you done such as a live event, and exhibition etc?

The mural in Laforet Harajuku, DICKS exhibition, and the job for Evangelion. The mural was ten meters widths, and I drew it as a live event. It left an impression on my mind because I enjoyed drawing it. DICKS exhibition was concentrated on my work with penis-creatures. In my work, there are not only the characters with penis, also penis itself as a character. It was first time to have a show with only drawings of penis-ceatures. There were many different opinions about the show, but I want to keep having this exhibition periodically. I think the penis-creature is cute, but some people think “Oh my…”. It was impressive to know different reactions. I also enjoyed the job for “Neon Genesis EVANGELION” because I’m a big fan. I created a creature which unite Rei Ayanami and my own creature. 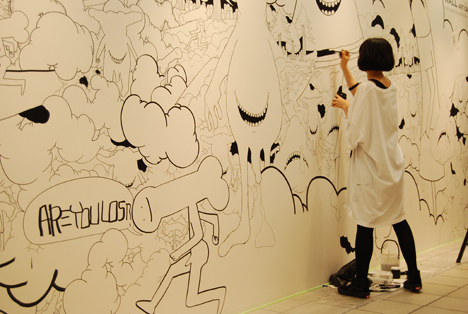 Please tell me your favorite music, fashion, and things.

My favorite music is classic with piano and cello, Alva noto, and world’s end girlfriend etc. My favorite fashion is COMME des GARCONS. My favorite things to do is skateboarding and going to forests. 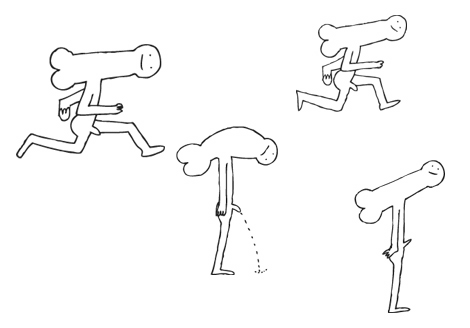 “DICK-KUN running in the dream”

What is the important thing in your art work.

To draw my creatures carefully with a lot of love. My drawing creatures are my dear darlings. I consider each of them as an individual. So, I appreciate them to show up in front of me.

What is your up-coming schedule?

I’ll create a wall painting at Spica Gallery in Minami-aoyama from October 25th to November 3rd. Also, I’ll participate in Aosando Art Fair from the end of October.