With his childhood memory of what he calls “the ruins of the future” in the aftermath of the Osaka Expo ’70, the artist Kenji Yanobe has been creating art in a unique form with a social message. To coincide with another exhibition at the Kirishima Open-Air Museum, Kagoshima, his first picture bookwork entitled “The adventures of Torayan” was published, and Yanobe is currently holding an exhibition at the Sapporo Miyanomori Art Museum as a launch event for this publication. In this first solo exhibition by Yanobe, an installation of Torayan puppets are also exhibited along with the book. In this interview the artist told us many stories from behind this launch event exhibition to the special experience that he has had in Hokkaido.

Torayan is a character evolved from his dad’s ventriloquism puppet, Ken-chan. One day, the artist saw the puppet wearing the uniform of the popular local baseball team, Hanshin Tigers, and since then the puppet started to be called “Tora-yan” (as “tora” is a word for tiger in Japanese). The appearance of Torayan as part of Yanobe’s art work was at his first retrospective exhibition in 2003, Megalomania, at the National Museum of Art, Osaka, which had been built on the Osaka Expo site. Yanobe tried to put a small-sized atom suit (nuclear-proof suit) on the puppet like the one he had worn for his previous projects. “It’s funny that it was not my own child but it was Torayan that seemed to fit perfectly in this suit”, the suit was for 3 year-olds, which was then his son’s age. 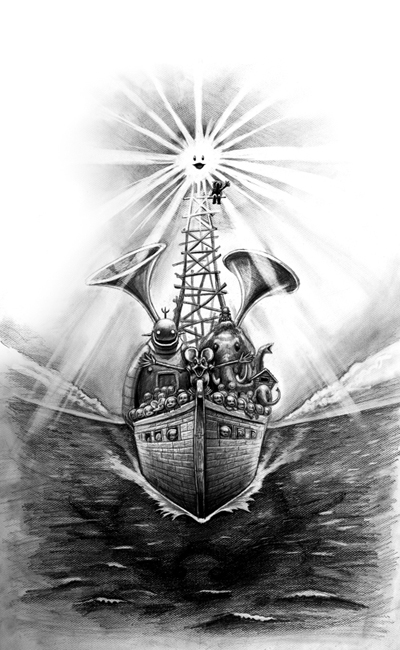 The picture book tells the story of Torayan picking up a small piece of the Sun, meeting many friends on the way, and eventually helping the Sun grow into a big Sun by the effort of Torayan and his friends together. To overlap the story, photographs that documented the actual process of making the work are laid out by turns with the drawings of the story, which makes it feel as though the fantasy of illusion came to meet reality within this book. In the exhibition, along with the original drawings, the photographs as well as the copies of the book itself, there is included the special episode with an additional story of “Torayan Yuki No Machi E (Torayan Goes To The Town In Snow)”, and copies of the special edition in the atom-suit cover are sold at the exhibition. 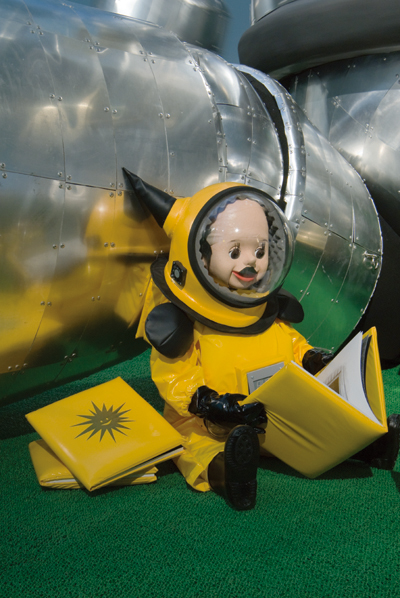 The story of the book was based on Yanobe’s own experience in a project called, Atom Suit Project, where he visited the Chernobyl site in 1997 in a nuclear-proof “atom suit”, and the doll he found in a nursery school and the sun, which were the motif for the story. Some might have had an impression that Yanobe made rather large-scale works, and this is his first picture book that he ever made. “It doesn’t make much difference whether it is a book or an art work that I make. When I make art work, I always make it as if I am shooting a film.” Yanobe’s works, indeed, have the quality of narrative-ness in quite a distinctive way, and they all seem to be composed of many stories. The form of picture book was most probably the best to express the narrative most effectively. In this interview also, Yanobe talks of his experiences and happenings in a narrative form, and it seemed that everything that was told could be connected to each other as if they were a series of tales tangled up with one another.