This month’s cover of SHIFT was created by WOW, a creative production of TV commercials and promotion videos which sets its bases in Sendai and Tokyo. Commencing with “Motion Texture” project revolving around the axis of “extant imagery” and is manifested in such as media as installations, the web and DVD video, they always create works with a pursuit of a high quality and new perspective of visual images, and other various expressions. We had an interview with Mr. Kano, a visual art director of WOW. 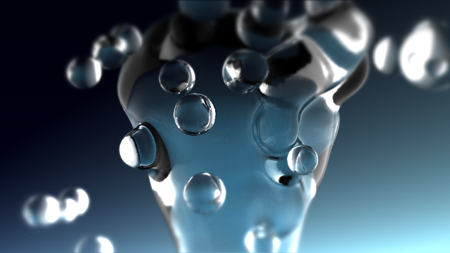 My name is Mamoru Kano. I’m a visual art director of WOW. I’ve worked on various ways to express images, especially TV commercials, using computer graphic techniques. On the other hand, I’ve also established own web site “Futurismo Zugakousaku” and presented an image expression by algorithm as a program art. Currently, I’m trying to integrate computer graphics I’ve done at WOW with algorithmic expression I’ve personally done. I was always interested in the information design and adopted programming to image production, however, I’m thinking about using a technique of computer graphics to an expression that is difficult to be created only by programming in the future.

Please tell us about WOW.

Wow is based in Sendai and Tokyo and is a creative production which mainly creates TV commercials and promotion videos. We began with members in Sendai but years later, opened Tokyo office and expended the range of expressions by gathering various unique designers.

I think works we do are divided into 2 types. One is a “high-quality” image. This is about how we visualize a certain pre-existing theme to be expressed with high quality.
The other is a “new” image. This means more about a challenge to an installation work or new media. Among most of these works, there is no precedent, so how flexibly we come up with an idea is important. We don’t specially define roles of each office, Sendai and Tokyo, but it seems like that Sendai office creates more “new” images than Tokyo office does. For example, “JURYOKU” and “UONUMA” (in-house unit) which elected for the world tour from RESFEST, and “Motion Texture” : these are created by designers from Sendai.

At Tokyo office, we have designers with great skills of CG techniques to respond high demands from our clients. How effectively to visualize an idea and how real to recreate a natural phenomena. We work on these hard tasks everyday with our designers’ ability to deliver. 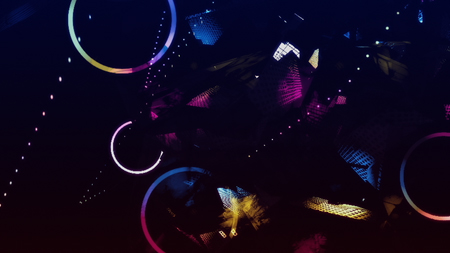 It’s a project to express the concept “extant imagery” in several media.
We have an announcement of original works on a regular base, but this time, we put focus on the concept not the works. This is also the first time to try the concept-centered project. We create works as a medium to deliver a message. We have had an exhibition of installations by Sendai mediatheque and released a DVD. We will also express this concept in different media such as a web site in the future.
Speaking of the installation, we set its theme as an interaction between audiences and the work. As the audiences walk a street, plants and trees swing together. As they walk on a puddle, it makes a wave. These little interactions are created with a technique called “Quartz Composer”.
Theme of the DVD is an interaction between the author and the work. In its production, we boldly added motion design by simulation and algorithm. Designers created their own worlds by their imaginations and generated various phenomenon. As if they recorded their worlds, they designed images. I think this DVD is like a documentary of the imagination.

How do you think the exhibition at Sendai mediatheque came out?

Rollicking children, a woman lying down quietly, people slowly walking down in images… I saw a new way of images to be created by seeing a moment of which they interacted with those image works. Especially, children and older people really liked this exhibition. Some of the older people told, “I’ll come back tomorrow” to a staff. It was also the first time to exhibit works in a huge space for us, but with a great support from staffs of Sendai mediatheque, we could have a valuable experience through the preparation and exhibition. There were more people who came to the exhibition than we had expected. This was a really surprise to us. 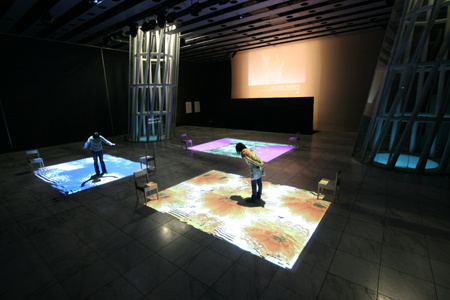 What can we look forward to the future Motion Texture?

Currently, we prepare an exhibition of the installation in Tokyo. We are planning to make this exhibition with an up-graded system, solving some tasks we have found through the experience at Sendai mediatheque. We are also in a progress of making a web version of Motion Texture. I hope we can create something of “existing images” featuring CG and web with our originality, which no one else can create. 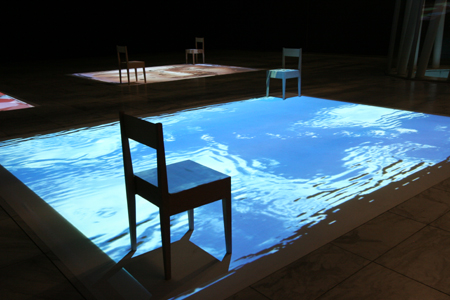 Can you introduce some of your projects you are currently working on?

First of all, I’m working on own original image. This is a part of the regular announcement of our original works. I think I’m putting much effort into this; I shot a person hang in midair and constructed a background with full of CG techniques.
This is not directly related to my work, but there is some activity going on in the office and we try to take 3% out of our whole work time to reading. At a certain time, all designers get together and read different genres of books. 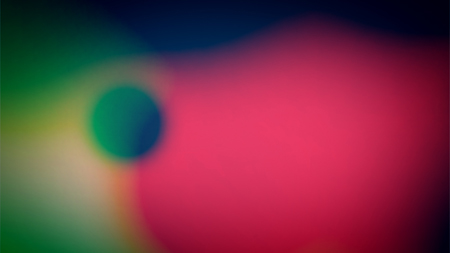 What is your concept of the SHIFT cover this month?

Something rustling in the wind inspires us to imagine that invisible wind, moves our hearts, and makes us forefeel something to be happened in the future. The bottom doesn’t change but time passes and the world changes. It is not “Change” but “Shift”. I visualized an image of impermanence and eternity.

What do you plan, and what do you want to challenge in the future?

I want to quest an expression that exists only in the present. For this sake, I believe it is important to set a base with grounds and philosophy at the bottom not only to seek for a visual expression. I want to seek for a visual design which is an extension of a flow of science and philosophy. I want to express my sensitivity through such design. This can’t be accomplished only by individual production, also not only by work. Crystallizing an inspiration generated from a border line between own ideas and skilled expression I’ve learned at WOW is an experiment of a pure expression which exist in a gap of self-assertiveness and pursuit of own interest. Excitement when I created an image for the first time. Expression of a combination of “thinking” and “creating”. We want to gather various information, think, and share to actualize this excitement.

Please leave some message to the readers.

When we look back on the present decades later, I hope we could say it is full of amusing expressions. I want to see many works and create them, too. I wish all of us could be a co-production.