Artists/designers across China were given 2-3 weeks to personalize the toys that were distributed to them. In the end, 102 designers contributed to the exhibition and many more (estimated at an impressive 200/300) turned up for the opening reception. While platform toy art is a fairly new art form in China, it is extremely exciting to see the buzz this exhibition has generated among students, creative industry workers and even the most unlikely suspects, elderly local men in singlets and shorts from the neighborhood. 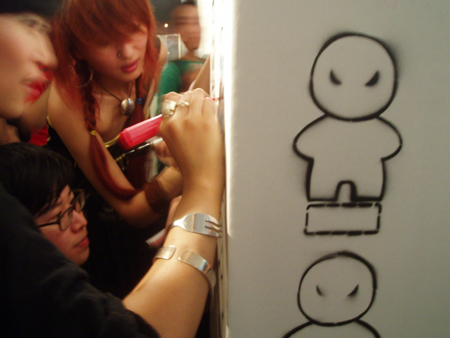 Bringing art to the people – both to those who have the impression that street art must be illegal in order to be street art and to others who have never been in contact with art before – is exactly what da>SPACE aims to do, which is also why da>SPACE makes sure its exhibitions are free of charge. 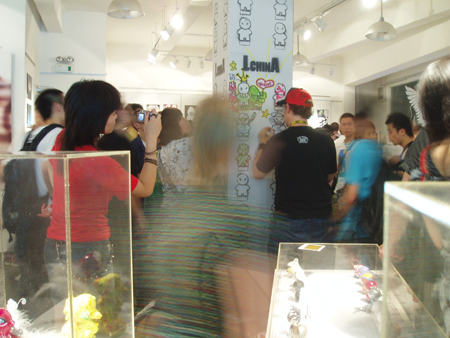 One of the attendees of the exhibition opening, Saint Tang Xu, a 20-year-old student revealed that her fascination with toys had started 3-4 years ago when she looked back at her childhood toys and realized she now likes them even more. Her most expensive buy would have to be a RMB 3,500 Blythe doll she got a friend to buy from Japan.

So who hasn’t already read about China’s rocketing economic growth in the newspapers? Now da>SPACE wants people to sit up and realize the explosive developments in China’s art scene too. For a start, I, China will hope to become an ongoing project which will involve more artists and more cities across China, eventually overseas ones too. With its schedules fully booked till March 2007, I think we can expect to witness more electrifying urban art collaborations from da>SPACE in time to come.