Once the parade has marched down the Boardwalk and down Neptune avenue past the judging panel, the participants congregate and offer up any “wanna be” photographer the opportunity to shoot them at will. There’s almost as many people taking pictures as there are people dressing up, but it’s a great opportunity to capture up close some of New York’s most extroverted characters and what has become a New York institution. 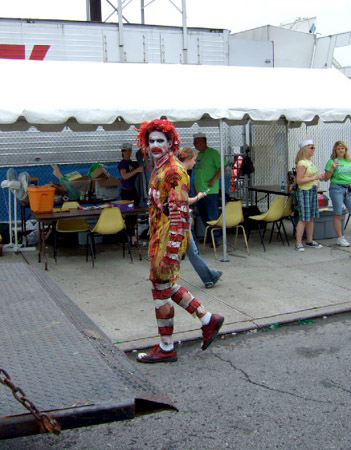 A guy clearly not caring about the “sea” theme but he gets 100% for effort!

The next step of the whole event is often what separates the men from the boys as people descend down towards the beach area where they promptly run into the freezing and ominously murky looking Atlantic Ocean complete with their costumes. This year however looming clouds eventually closed in and torrential rain and thunder sent most of the sea creatures and people carrying expensive cameras diving for cover, including myself! 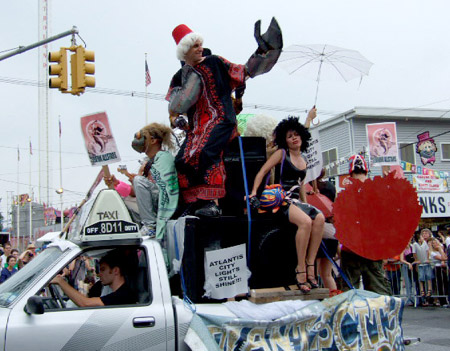 Part of the parade in which contestants use any means of transportation they can find.

The Coney Island Mermaid Parade unlike many other parades I’ve seen in the city retains an air of independence which sets it apart. It goes back to the comment of it being for many a statement of self-expression, and one that is all too often hampered at other events by a number of contributing factors; the authorities, lack of available space in the city, public safety concerns, overly rigorous crowd control, transportation and other logistical factors. No such hampering was evident at Coney Island during the parade as the participants clearly revel in the chance to dress up and offer themselves to the crowds of fascinated onlookers and eventually the freezing cold Atlantic Ocean, until it rains!