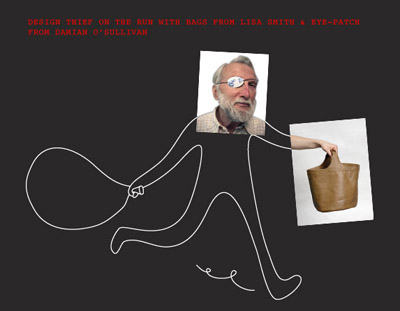 Last week thieves in Milan broke into the “TuttoBeNe” group exhibition of Belgian and Dutch designers during the Salone Internazionale del Mobile. Design thief on the run with bags from Lisa Smith & Eye-Patch from Damian O’sullivan.

Damian O’Sullivan and Lisa Smith, two designers who live and work together in Rotterdam (NL), were part of the unfortunate group to have prototypes stolen from them.

Damian O’Sullivan was showing his proaesthetics project, which looks at the aesthetics of prostheses by opting for a change of material. Instead of making the prostheses (crutch, arm-cast, neck-brace and eye-patch) in plastic or other modern materials, he chose porcelain, a material well suited to the home and somehow more befitting the elderly.

Lisa Smith was presenting (Handle with Care), a project born out of the frustration in the lack of innovation of the hard components (closures and handles) within the bag and apparel industry. As a result, these bags were designed around the components instead of them simply being an after thought. Furthermore, she asked herself the question whether (fragile ceramic handles could co-exist with durable leather bags? The fact is: ceramic is strong but needs to be handled with care.

Both Lisa and Damian’s projects therefore shared the same theme of fragility and this does not seem to have gone unnoticed to the design conscious thief that took a lot of their work. So, if you see anyone running around with bags with ceramic handles and a porcelain eye-patch we’d like to know of their whereabouts.