“Man is the only creature that can purposely make joyful happenings in such a cold place on a cold day.” said Takeshi Hosomi of Ellegarden, one of the live performers of this event. Tens of thousands of spectators who had already gotten excited by the first hot performance by 10-FEET and snowboarder jumps shouted more and more, and reached its peak with the Super Final that followed. It was exactly “the hot night in sub-zero temperatures” that happened in Sapporo in January.

Toyota Big Air is one of world biggest Snowboad Straight Jump Contests with the crown of TOYOTA, organized by HTB (Hokkaido Television Broadcasting). It is a big stage where the top, professional riders in the world play an exciting game, and also a dream for Japanese riders who can participate in by winning the preliminary contest. This Toyota Big Air that had left a lot of historical scenes for the snowboard field since 1997 and has kept growing every year as a spectacular event right under the wintery sky to which everyone paid attention and not only to stay in a snowboard contest. It has come finally to the tenth anniversary this year.

I sent to SHIFT readers here because the “Man’s feat” the same as the Ellegarden’s word was seen in the entire Toyota Big Air event. And because I was really attracted by riders’ “power of expression” and “Art of the moment” in sticking to each sense of values even though the result of the match was also important for them 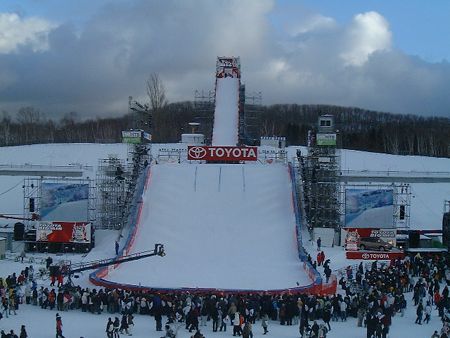 On January 28th, the snow had repeated falling and stopping since the morning. Before arriving the entrance of the stadium, the jumping venue of about 38m in height (equal 12F of a building) jumped into our eyes. The diagonal degree of 47 were seen almost squarely when looking closer. There were people who formed a long line at the entrance before opening time during the snowstorm.

The contest started after four o’clock in the evening when the jumping venue was lit up vividly. The place opened at one o’clock, however, and visitors could enjoy watching public practice, booths, attraction, and live acts. The time was good to slowly improve the expectation in front of the jumping venue. 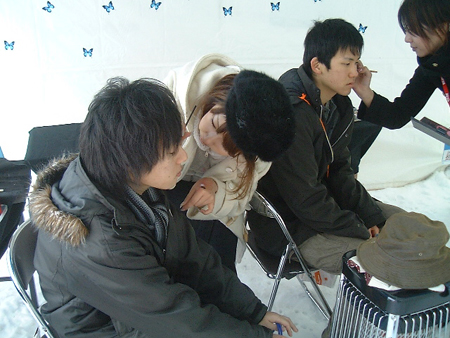 A booth by Miwa Yokoyama who is familiar at SHIFT presented face painting. Visitors could select cute motives prepared or ask to make their original. The petit-art indispensable for festival was very popular among those piling up feelings for Super Final. There was the warmth of the smile in the coldest booth.

As a memorial contest on the 10th anniversary, “TOYOTA fan event” had been held simultaneously with the opening in the TOYOTA booth. Visitors enjoyed the lot association to participate with the applied key word in 4 kinds of vehicles exhibited. There were lots of people here and there who had the premium they wanted. 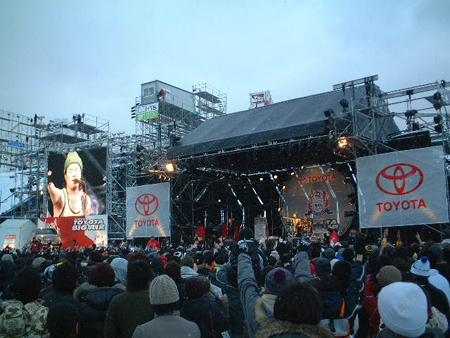 The snow had repeated falling and stopping. The number of visitors had gradually increased, and some of them began to gather in front of the stage next to the jumping venue. When the time for beginning the contest got closer and the performance by 10-FEET from Kyoto had started, all the people there were united for the first time since the opening. 10-FEET who were made a legend last year having their performance in a blizzard came again this year with the original theme song for the “TOYOTA BIG AIR” 10th anniversary. The appearance of vocal Takuma this time was just in a tank top! He made everyone in an uproar, and the waves of people made it seem like the earth was moving. Toyota Big Air had started here!

After the performance, 10-FEET continuously called “TOYOTA!”, and tens of thousands of people responded saying “BIG AIR!” getting into the rhythm. It continued several times, and having the biggest and last call of “BIG AIR!” as a trigger, two big screens next to the jumping venue spouted with fire works. A total 16 of invited riders and four Japanese riders who won the preliminary contest the day before, descended brilliantly from an upper start gate, colored with the introduction film on the screen, the sound, and the light. What do riders see in scenery from this start gate to where only handful riders can reach? It was a moment when everyone’s expectations rose the most.