The exhibition “X-COLOR / Graffiti in Japan” was held from October 1st to December 4th at the Art Tower Mito. About 40 “bombers” met at the so called ‘first large-scale exhibition showing Japanese graffiti art’. Some of the artists represented were Kane, Kress, Kami, Esow, Dem, Nesm and QP. What if such hot artists bomb wherever they want, in a white plain cube? Let me tell you an unheard-of exciting story. 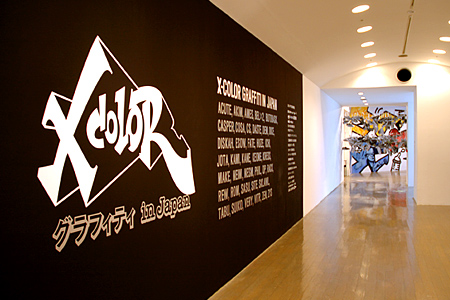 It takes a little more than 2 hours to go from Tokyo to Mito, a kind of short trip. First you will see ‘Alpha’s Bet’ by Rammlzee. Each armed written alphabet has one longing for ‘old school’ aggressiveness. It is a great motivating works just after you start the journey. 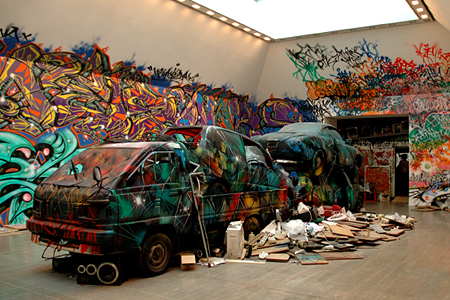 When you keep walking, Kane’s destroyed cars catch your eyes. Both cars piled with jumbling appliances are all overwhelmingly painted decadence-space which stick for museum staff show the other side of destructive aesthetic. 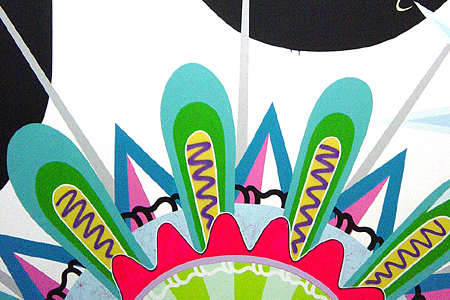 Passing a dark Kress piece called ‘My Room’ light suddenly swallows your view followed by Kami’s heavy black lines and fickle colorful paintings by Sasu. Step inside with wonder and look up ahead, you will see a great black point that stares at you. Have a seat on one of the two placed chairs, and just let yourself go – innocent. This is a silent sanctuary unconsciously staggering inspired by Kami and Sasu.