The performing art unit Sal Vanilla provides very unique spatial art. They recently held a live performance event “+813″ and a sound media event “.JP” at BankART Studio NYK, in a former postal administration building warehouse in Yokohama, Japan. This year 2005, they have an ongoing project called “Vanilla Sports“, presented in a 3 part series. Vol.01 and 02 have already gained public favor. Leaving the final edition Vol.03, this additional project “+813″ and “.JP” focused on a Japanese sense of the contemporary expression, which is also appearing in its titles. 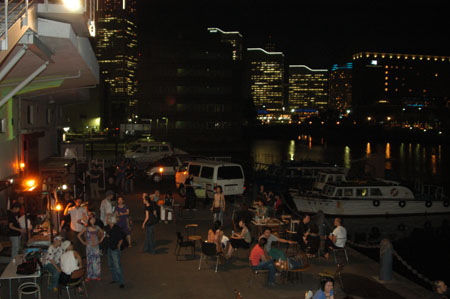 At the entrance area along a canal of Yokohama, an open-air lounge was run by DJs including Kloma and Luftzug, and a bar “Vanilla Fish” booths were lined up. The scenery was beautiful and refreshing while sounds echoed throughout the surface of the sea. It was a pleasant place to spend some time till the performance begins. In other words, visitors could feel the atmosphere of this event as soon as they arrived to the place. 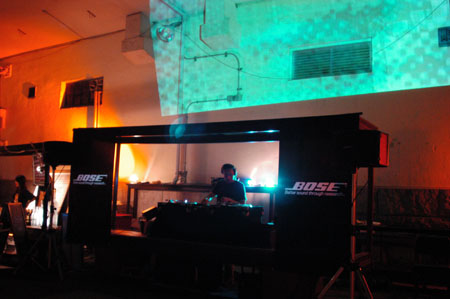 BankART Studio NYK has two big distinctive features; the large columns are lined up in the center of the hall, and the reverberation is terrific. The whole performance held here made the best use of such a hall condition. Having a complete sense of unity with the venue, this event made numerous expressions possible, which cannot be done in normal theaters.