At Gallery Speak For in Daikanyama, there was an exhibition “Tokyo Night Curusing!” The word “curusing” is a combined word from curation and cruising. The exhibition was curated by Yen. He is a graffiti artist and a tagger himself and twelve notorious graffiti artists who are “cruising” streets in the midnight hours throughout Tokyo came together for this exhibition. 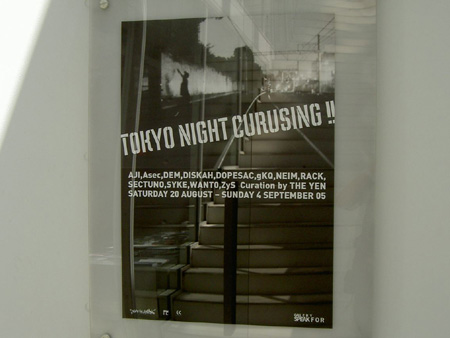 There have been strict crackdowns and clearing operations on graffiti in Tokyo. So, the exhibition provided a really good opportunity for us to appreciate the canvas works of graffiti artists in a gallery space. 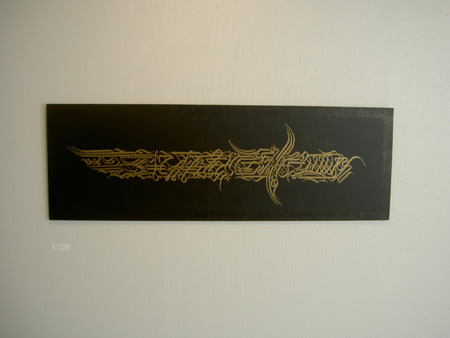 This work is made by ZYS. He is known for his hardcore stance and focus on graffiti and incorporates various styles in his work. In this piece, he filled the canvas with black color at the beginning. Then, he drew many daggers using beautiful lines that stand out on the street in the city. If you look closer, you will find numerous fine “taggings” in black that rim the canvas. 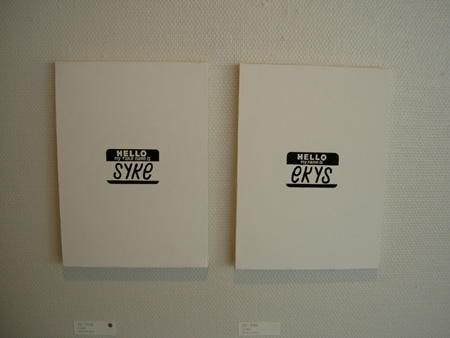 You have probably seen some stickers on the street made by ekys. He puts his stickers all over the city. There has even been a rumor amongst internet chat rooms that it’s a cult-like operation because of its abnormal quantity. ekys drew a tagging that says “HELLO STICKER” on a white canvas. He also displayed a reverse version of it titled “syke”. 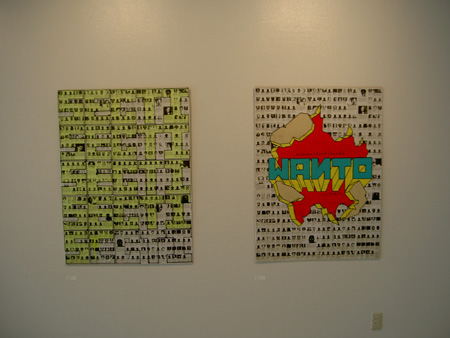 WANTO and SECT draw gigantic graffiti works on the sides of the railroad and highway. For the exhibition, each artist drew their name on a monochrome board with people’s portrait photographs. WANT’s work (right) is striking because his name WANT is breaking down the wall in conjunction with his use of elaborated lines and beautiful colors. SECT filled the canvas with several SECT1s (left). His work looks like a monogram. 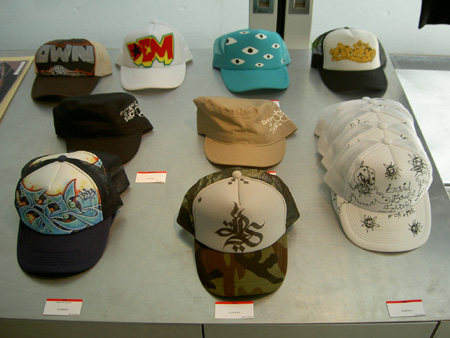 Each artist displayed works that are a bit different to works that they usually draw on the street. There are also handmade caps and T-shirts by the artists displayed and sold in the exhibition. 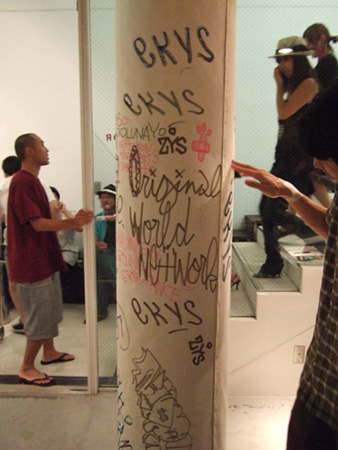 “Are the artists in this exhibition coming from other countries?” was a common question for a lot of visitors in this show. Needless to say, it was a borderless exhibition, and there were so many people coming at the opening reception party including artists and persons involved. Each person drew taggings on a column at the entrance of gallery and the all white space on a column was filled with their taggings very quickly. It was a good opening party, but I was impressed by the artists. They never inform people of their real names. I was moved how they keep a stoic stance to what they do with graffiti.