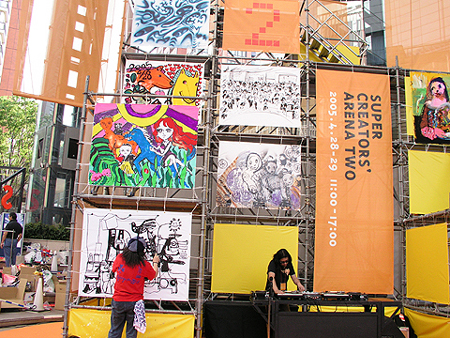 On the first day, which coincidentally also happened to be the over 30 degrees day in Tokyo, over 50 groups of creators called “SCA-2 (SUPER REATORS’ ARENA 2)” created an open air art market. The venue was Roppongi Hills Arena, the same space that was used last year. The area was packed with sellers and buyers. On a circular stage, a live painting performance occurred where one piece was painted directly after another. The atmosphere was hot and excited as you could sense the anticipation of the beginning of Golden Week (Japanese national holiday of consecutive days off.

There are some events that creators sell their works, without regard to scale. However, it is unusual to see that they bring their personal belongings to sell and are asked for discounts from buyers. This is a really valuable chance for fans to get their original t-shirts, clothes used at work, books for reference, idea sources, and of course their works, with free market prices. On the other hand, some elderly people and people who just stopped by from the neighborhood seemed not understand the point of this project at all and kept trying to bargain the prices down in front of the prominent artists. (They don’t know who the artists are.) Being surprised like “Are you going to get the t-shirt, old lady?”, it was a smile-provoking scene which doesn’t exist in exclusive young culture events. 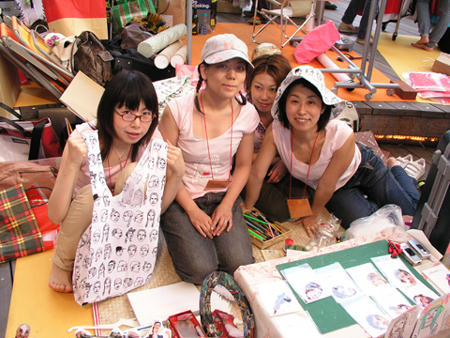 However, the creators who were drawing some pictures or creating works to sell at the place must have a hard task. Seeing artists working “live” was very popular among visitors. Some creators couldn’t finish their works at the place and took home as an assignment. Their free market will last until they complete these works.

Although the first day of the event was a weekday, the number of visitors to “SCA-2” seemed well over the amount of attendees last year. I expect that they will liven up the start of Golden Week in next year too, with this hot and heated event.