“Little Boy” is an exhibition showcasing a selection of ten Japanese artists who have risen to fame, apparently to cult status by exploring the idea of ‘Otaku’. The meaning of ‘Otaku’ refers to the visual culture surrounding a generation obsessed with anime and manga, and roughly translates as ‘pop cult fanaticism’. The exhibition caught my eye for the sole reason that I know next to nothing about Japanese art and ‘Otaku’, the most exposure I’ve had is the very occasional anime flick. As a Graphic Designer I’ve often skimmed through design books and oogled over quirky and colorful designs that have come out of Japan, but have rarely been able to apply any of its vernacular to what I was doing.

The exhibition itself showcased a variety of work in different styles and interesting mediums, all central to Japanese pop culture and the ideas that have spawned the stereotype of obsessive and nerdy Japanese kids. Some of the things that stood out for me were; 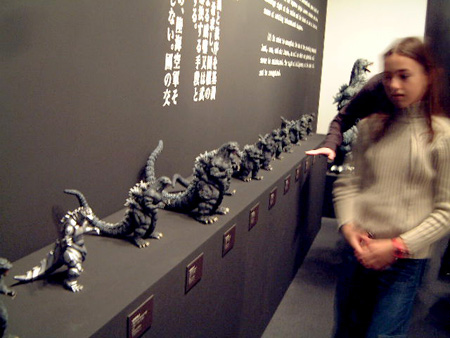 Godzilla models which show the evolution of Japans’ most famous monster from 1954 – 1995. Also, bright red oversize anatomical diagrams of the creature. 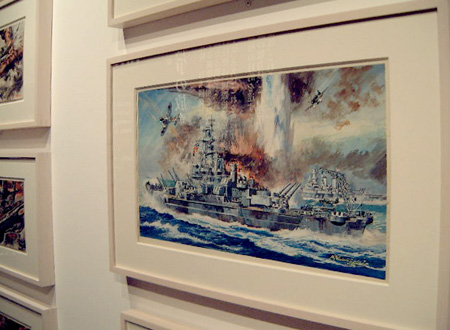 Depictions of war machinery that were elaborately and painstakingly rendered with acrylic (they must have taken forever to produce!). 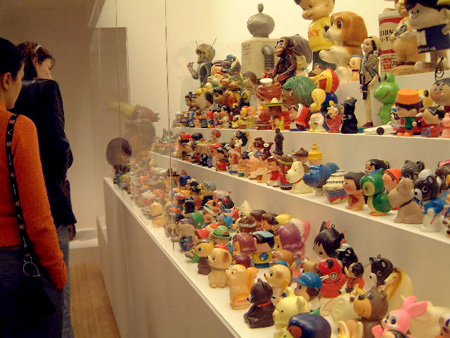 A huge collection of vintage toys (very cool and very retro!), many of which were mascots of Japanese companies that evolved into corporate giants. 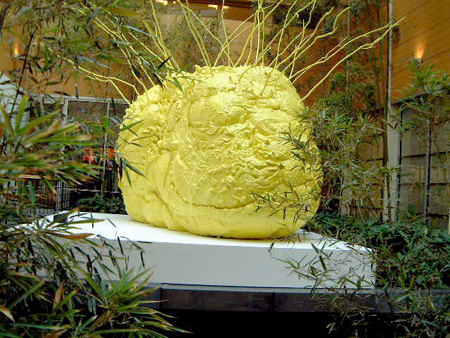 Digital prints on vinyl that portray intricate cityscapes overgrowing with plant-life. Figurative depictions of human skulls by the exhibitions’ curator, Takashi Murakami, mirroring the shape of a mushroom cloud – that of Hiroshima.

Descriptions which accompanied the work on show gave me an insightful background into the artists and their inspiration. I was able to see behind the often cute, quirky and bizarre work and get a sense of where it was coming from. The name of the exhibition “Little Boy” derives from the nickname given to the atomic bomb dropped on Hiroshima in 1945. I guess the curator of the exhibition wasn’t afraid to make a point because he also had on display a copy of ‘Article 9’. This is one of the first things you see as you enter and was a document drafted by America after the Second World War to prevent Japan from flexing any military muscle after dropping Little Boy!

As it turns out, references made towards the war, the bomb, and the ensuing apocalypse is clearly evident throughout much of the exhibition. Murakami is known as someone who explores art forms that have stemmed from the “generational aftershock” since Hiroshima. Otaku is synonymous with a culture and visual language surrounding Anime & Manga, which themselves conjur images of the apocalypse, machines of war, cityscapes, monsters with supernatural powers, wide-eyed innocent looking children (innocent until they get angry of course!), and the occasional huge yellow blob!

Having seen this eclectic mix of work from Japan I feel like I’ve learnt something and would recommend anyone to check it out.