What is the most familiar media form of “image”? Hmm… TV? Well, it’s all right but I seldom watch it. Rather than TV, I find more familiar things for everyone on my way to work. It is scenery or the simple spectacles of the city, which everyone sees in daily life. Asphalt, sign boards for 24 hour convenience stores, cars on a road and the noise emitted from everywhere. These are definitely an “image” with a sound track. In our every day life whether at work or in the confines of our private environment , the ratio of visual element s is always high and they keep changing on a time axis that is it’s visual. If I think like this, other ways of expression, such as 2 dimensional graphics (without sound) or music (without visual) have some kind of limitation, and I feel the “degree of limitation” is avant-garde. 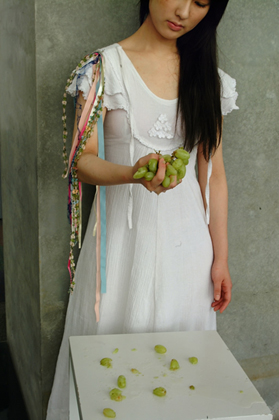 An exhibition “MIXER” which combines the “film x photograph x performance” by Rina Naganuma will be held in the event space “4 pla hall” on the seventh floor of the fashion tenant building “4 chome plaza” in the centre of Sapporo. Rina is a visual creator living in Sapporo and organising “Eizoko”, which is a screening event of independent films that was started in 2000. Its goal is “to make the distance between a filmmaker and a audience narrow”. For three years, the event has been providing opportunities for creators and audience members to meet people or good works not only with the screening of films but also with exhibition of pictures, installation or photographs. This event was held three times in Sapporo and once in Hakodate so far. At this time of “MIXER”, they will show things that have been obtained through the activities of “Eizoko” under the theme of “change”, mixing three components of “movie”, “photograph”, and “performance.” They say they want to show the “change” of various forms, such as the change of a substance, change of feeling, evolution, deterioration, and modification, and make audience experience these things. 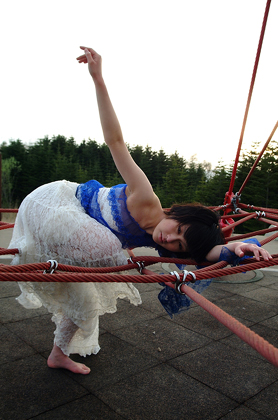 Three elements, movie x photograph x performance, are not just displayed in the same space, but this exhibition is likely to push the boundaries and merge them together. Adding live performance, they are trying to make a dynamic and organic space rather than a static exhibition. If the audience can be a part of the collaboration, it would be better. Anyway, I love the word “MIXER”. Isn’t it intelligible? It is much better than “collaboration.” I want to expect a delicious “mix.”