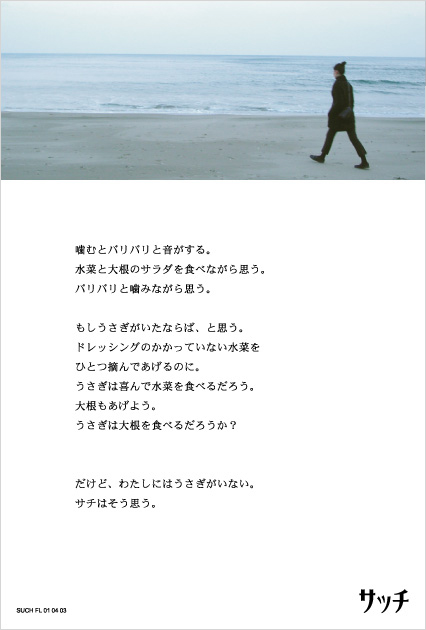 The event “SUCH” is held by three performers based in Sapporo who each take charge of “music”, “photograph” and “language”. It is a three person collaboration event which sets up a fictitious girl named “Sachi” and expresses “daily life” using the medium of each expression. They are friends since they met in an orchestra club in high school and they have know each other for more than ten years. They have been thinking that they want to do “something interesting” and tried various things together. One person loves music, another loves photographs and the other loves writings, so they thought that if they bring their favourites together, new different things might come up, then this event was produced.

I interviewed one of the sponsors of the event about how this event is carried out.

“I don’t want to support a composition which makes a singular point to somewhere both in time and space. For example, if there is a live performance in the middle of this event, the time of the live and the space of a stage will become a singular point. Speaking of time, we don’t carry out any special climax in certain time. I would like to make this event with loose continuation in which people can enjoy even if they are not in the event from the start to the end. Speaking of space, I want to avoid the single directivity that everyone turns their eyes in the same direction and looks at the same thing. With this explanation, people might think there is no “composition” but it is not like that. I aim “the composition which is eliminated compulsion as much as possible”. We don’t consider “SUCH” as arts or cultures but as something interesting in every day life.”

Every time I reread this comment I feel the stance of new natural expression. I am going to visit and enjoy “SUCH” as one of the audience.