It then leads to a modest space where costumes and a filming of Messiaen’s “Saint Francois D’Assise” at the Deutsche Oper are presented. Libeskind was commissioned to design the costumes and stage on this occasion and his geometric approach is apparent: “imagined shapes, rhythms, colors, chords, keys, surfaces and movements have opened a labyrinthine path toward a turbulent and strange peace.” 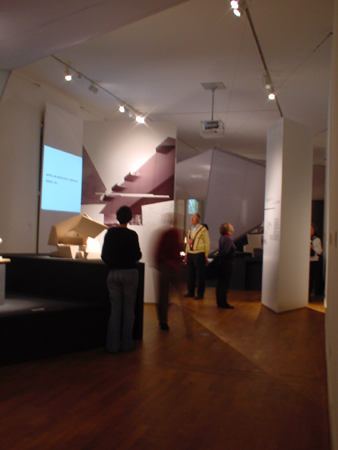 There is a feeling of pride lingering in the air and one suspects that Berlin cannot help but be proud of hosting the exhibition, of claiming the Jewish Museum as theirs, of once having had Libeskind as their citizen. His ideas and visions, and their subsequent developments are displayed clearly here alongside close-up films of himself, revealing his persona and life at the same time. And everything points to the fact that he has only started, and it is far too soon to consider this as a retrospective.