Splashes of white against the static somber of black. Bodies of motion versus bodies of inactivity. Reality versus appearances. Classical Bach juxtaposed with the Chinese flow of Tai chi. These are just some of the contrasted opposites in the dance performance “Moon Water” by Cloud Gate Dance Theatre from Taiwan. Moon Water is a poetic display based on Taoist philosophy. The performance deals with the juxtaposition of the opposites, of reality and of time, expressed through the representation of dance. 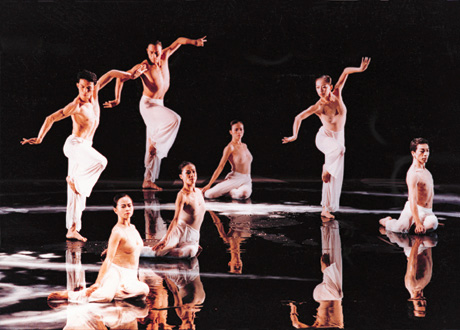 The dance movements were derived from the principles of Tai Chi, depicting the effort and effortless phases in life. Each movement begins from a stance, developing and expanding with time, interweaving with the audio projection of Bach. Creating a discourse that brings breathing patterns, rhythm of music and movements in harmony.

Each chapter behaves like a scene that overlaps and proceeds with grace, character and poise, as reality is questioned through the presence of mirrors that are revealed throughout the performance. They create different perspectives and different angles not only to the sight, but also to one’s thoughts. 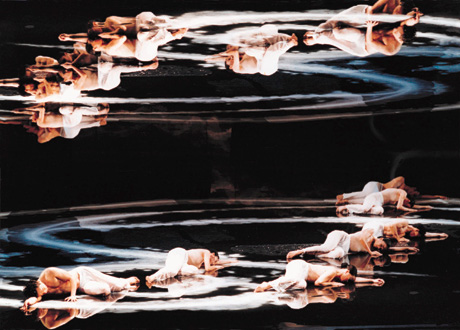 Bach takes a break ever so often, leaving intense silence to the movements of the dancers. Against the calligraphic strokes on the stage, it brings to mind conflict, tension, turmoil and yet providing a sense of tranquility.

Reality is further blurred through the presence of water. It seeps onto the stage, gradually covering it, like a painting before one’s eyes. It flows and it’s path directed by the dancers’ actions, creating a display of movement, light and sound that further refracts the reflected images and movements of the dancers. The sound of tricking water echoes throughout the concert hall, echoing the intensity of the performance.

The climax comes when all the mirror panels are revealed to composite an entire projection of the stage. The reflections of both the dancers and images from the water are projected as a massive display, like a painting that unfolds before the audiences’ eyes. Each movement, each note, like paint strokes across the canvas.

A question and answer session proceeded after the performance, bringing inquisitive minds to probe at the inspirations and ideas of the mind behind the project, of the choreographer Lin Hwai-min. The session ended in a light heart and inspirational mood, one that probed the audience to look at the moon.