Civil war, race war, terrorism and resistance for them are happening every single day, but for America, this terrorism had happened on their own country, and it was a huge disaster we couldn’t avoid. Now I can see that everyone seems very patriotic, and I have never seen the American flags show so much unity and the strongness of its meaning. 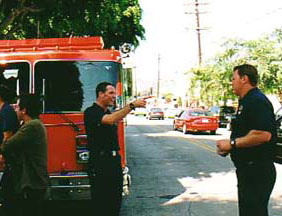 They had BBQ to gather money for charity campaign for families who lost their family – almost 300 NY firemen sacrificed themselves. A few hours under the flamming sun, more than 2500 people came to this small parking MOOVA, the profit went over $6,000,000. Many chiefs participated from fashionable restaurants in LA, so there were “hip” crews everywhere. Jason Bentley, Garth Trinidad (well known DJs in KCRW.ORG) took a part as DJ, the presentation was very unforgettable. And there is no need to say that the image of firemen became so much powerful ever. The event ended with the siren of some fire engines and the great applause from many people. 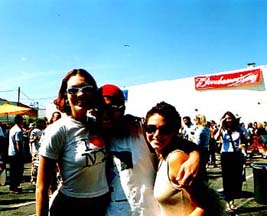 The charity campaign goes on through these various unique event. Sadness, fear, anger and confusion don’t disappear soon, but at the same time, many people seem to try to understand the importance of making our way to next step. It is not about forgetting this disaster. It is about how we keep our mind to not to give way to these cruelty by fringe. 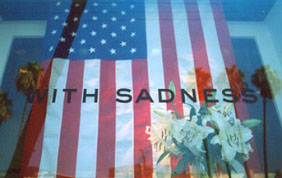 I sincerely pray for people who sacrificed due to this disaster that should not happen, and not to be repeated all over the world any further.