The work of LA-based graphic designer and animator Geoff McFetridge has been prominent in multiple media over the past few years. An exhibition at the esteemed Paris Gallery Colette gave the Canadian artist a significant global boost to his rising star status in North America, and much of his recent work in print, canvas, denim and video was presented in a retrospective exhibition titled “A Way of Life” at Shibuya’s Parco Gallery.

Having been introduced to Japanese audiences through his Champion Graphics artwork features in bi-lingual pop/youth culture magazine Tokion, McFetridge was commissioned to create the package design for Gasbook 9, where the mock-camo block became a familiar sight in the design bookstores of Tokyo. For the Parco show, McFetridge developed a living graphic environment of household items and decorations, printed in his camouflage-chic fabric designs on sofas, rugs, cushions, furniture, accessories, posters and even a full-sized tent. 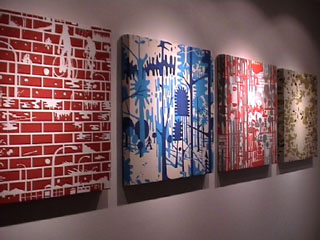 SHIFT interviewed Geoff about Champion Graphics work and his plans for future design and directing projects.

Tell us more about Champion Graphics. What kind of projects are you working on?

This week I am finishing a video I directed for a band called Simian. The song is “One Dimension”. They are on Source UK. I also am making stickers and an animated piece for Greenpeace and Dazed and Confused magazine for a Esso Boycott they are doing to protest the US dropping out of the Kyoto treaty. And some new graphics for Marc Jacobs. Next… I dont know.

Do you have a favourite piece of design / motion graphics ?

That I did? I like all sort of graphics. I love graphics.

How did the exhibition come about?

I was asked by Taka Kawachi a curator for them asked me. I guess they had seen my work at Colette, or maybe in Beikoku Ongoku magazine. 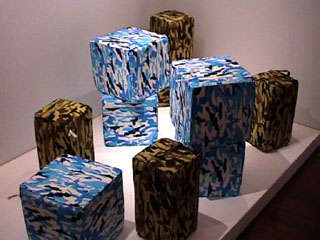 Was there any particular theme for the show?

It was loosley themed. I wanted to include new and old work, so I based it on a design show, like you would see at a trade show. “a way of life” came out of that idea, that these designs could surround you in your life. In the shows I always try to create an environment that is totally graphic. “a way of life” also refers to the fact that all the work is personal and autobiographical. Also the animated pieces and the posters are very PSA message oriented, almost preachy, soft warnings. 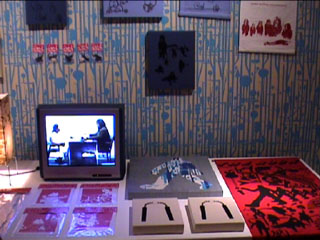 What or who are you inspired by?

My friends. I get a lot of help from my friends. Tim Koh, Bucky, Mike Mills, Spike, my girlfriend Sarah, Sakebomb, DJ Steven, Kevin Lyons of Natural Born, Mike Leon of Commonwealth Stacks…

Any plans for the immediate future. News on upcoming projects in Japan ?

I hope to be doing more projects in japan, but I am kind of waiting for good things to come up. I would like to do some furniture or product design stuff.

Any message to global design community ?