No ordinary dance music does the festival offer, instead, it focuses on a front line of sound based experiments reinventing the existing definition of electronic music. In fact, it goes beyond stereotypical “music festivals” where the predominant stimulation is aural. Rather, it is akin to art installations – not only does it provoke the auditory senses but multi sensory components, especially visual, play a big part in the presentation. 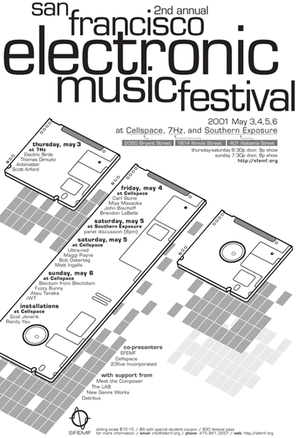 Atau Tanaka, a participating musician at the event, as an example, performed “Rail,” a sound/visual complex using motion detection sensors as a musical instrument. On the stage he wears this instrument, BioMuse, specifically designed to track electronic charges occurring in the human body via the sensors. As he moves his body, BioMuse then translates every muscle movement of the player, and converts the generated signals into sounds and images.

As if he were practicing fast Tai Chi moves on the stage, Tanaka’s motion synchronously controls various sounds. Tones, volumes, tempos, and any other audio properties are also manipulated. Simultaneously the body signals extracted via BioMuse trigger multiple image sequences that are video-projected on the screen, creating a complete integration of sound and visual via the performer’s motions.

Total of 18 composers/musicians performed their individual work during the 4 day festival. Each artist, although there’s a wide spectrum of representations in forms and aesthetics, consistently showed progressive, new interpretations of culture and music via creative use of technology. The official web site has each performer’s link as well as some inspiring sample MP3 files.