As the communication via computer has permeated through our everyday lives, designs with interactivity become more indispensable. Though it’s permeated deeply as an essential thing, there is one question whether a new form of design which has both easiness of use as an interface and artistic beauty can emerge. This question might be because those who are in actual scene of interactive design started feeling if the interactive design could be established as a certain genre. In such situation, an international conference where innovative creators and designers themselves tried to solve this question was held in Paris, a place still remained a conservative atmosphere for digital creative scene. At an auditorium of art school converted from a palace, more than 300 young designers get together and joined in the two-days presentation and debate. 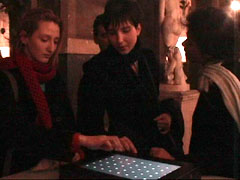 At the beginning of December in Paris, it was rather warm to be slightly sweaty in under a coat and gloomy even in the daytime because of the occasional rains. At the art school “Ecole Nationale Superieure Des Beaux-Arts” located on the left bank of the Seine. The conference “Numer.00” was held at a corner of this place formed by numbers of stone-built buildings former a palace. At the same time in Paris, a biennial international symposium ‘ISEA‘ which pursues the possibility between electronic technology and art was being held, and one of the corner of the ‘palace’ became the place to showcase numbers of electronic arts for ISEA.

On the day before the Numer.00 conference, I went to have a look at the exhibition. When entering the exhibition place, suddenly, there was a huge blast in the courtyard where altough students were enjoying doing sketches and chatting. Taking a look toward the blast, a huge game board in more than 10 meters square came into sight. Touch panels are installed on both sides of the board and pointing each point located equally on each panel, shooting sound and missile ring out. This piece is “Rekyll” by Oncotype, Denmark. 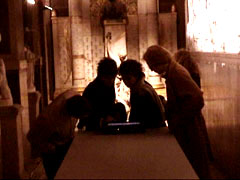 The concept of the piece is to have people virtually experience whether one’s natural voice can be transmitted under bombing in the street. Though it has a deep meaning, visitors were simply crazy over ringing the sound by touching panels. Entering the lecture hall with the roaring sound on my back, numbers of works, most of them were video pieces, were exhibited. The hall itself had a solemn atmosphere surrounded by old wall paintings and sculptures. Inside the hall, those works exhibited within monitors and computers were merged well with the solemn atmosphere and I got a feeling that electronic devices were becoming usual in our minds. 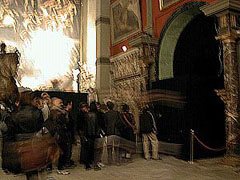 What I was most interested in for its way to exhibit was the CAVE exhibition. CAVE is the system that allows visitors to feel strongly the feeling of virtual reality using synchronized CG. A collection of the past excellent works (such as ‘Worldskin’ where users experienced tour the city under the Bosnia War as a tourist) was exhibited on the CAVE. CAVE was partitioned with thick black curtains and it attracted visitors curiosity more. (It might be because many people were making a long line.)

“Instrument a Gonds” by Jacopo Baboni Schilingi which was exhibited in another room at the bottom of the hall was outstanding for its atmosphere as if it was there since before. A bronze statue of a woman was installed at the center of the theater-like hall. By turning its face, back and legs down, it started speaking through the crevices. Each part had invisible sensors and the piece fit excellently into the space as a bronze statue.