Since 1979, SRL has staged over 45 mechanized presentations in the United States and Europe. For this first performance in Japan, robots, machinery and materials weighing over 28 tons were packed into 40 containers. They left the west coast on November 26th for Tokyo.
Their performance used to use radio remote control, but this was first time for them to adopt an operation system by ICP/IP remote control though ICC (InterCommunication Center).

“This performance involves loud sound, low frequency and blinking strong light. If you feel bad, please request assistance from a person in charge.” The stadium echoed with the announcement. Fire engines were stationed outside of the fence and at the same time, the loud noises of engines started to ring through from ‘robots’ mixed with the smell of oil. Temporary lives were put into the machines for this show. The clock showed between half past six to seven.

Machines started to move silently. A robot that raised its head like a dragon shot out fire, and another one that filled up a huge nunchaku swung it about like a helicopter. A huge paper-island with rocks and grasses went up in flames and was destroyed.

A TV reporter standing next to me was shouting, ‘Yeah, I’m happy to live at this moment!’
A huge cannon sniped at the island while a batting machine, aided by a laser sighting device, smashed rectangular lumbers into its victim. It was bullying rather than a battle… 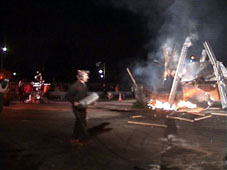 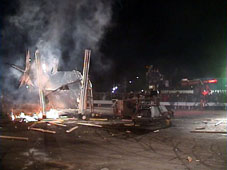 Nonresistant ‘islands’ were being destroyed… Robots destroyed and destroyed without mercy… The ‘island’ kept on going ahead in silence.

The next target was an animal robot looks like a dog or cat. Machines kept watch on the animal robot that were going ahead in silence… Then it was pierced with a rectangular piece of lumber, scooped out with a Nunchaku, burnt with a flamethrower and blown off its support by a cannon… 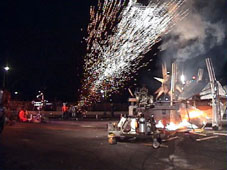 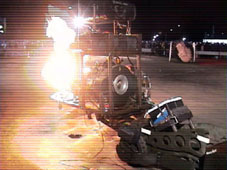 Turning my eyes to a huge signboard called ‘Pig Licker’ were wriggling its surface and a huge wheel called ‘Woody Copter’ covered in collage were thrashing about. Those humorous robots without weapons were destroyed by other brutal robots.

After everything was destroyed, the tower behind the huge field put together with huge cards started to move slowly and silently. It was just knocked down.

For about 45 minutes, everything was destroyed. It was bitterly cold and everything felt into ruins.

Machines with much destructive power attacked nonresistant machines. It’s naked violence. Did catalysis lodge in this destruction without pain?