In the streets of Tokyo hang huge posters where mechanical-looking robots are jostling in raging flames. Rumors of what lie behind these posters reach my ears here and there at the bar counter. It’s a robot performance never seen in Japan by the legendary group called Survival Research Laboratories (SRL). The performance was finally held by NTT-ICC at a huge stadium not far from Shibuya in an uproar for Millennium Christmas. Like a boy in front of a special effects movie, I was looking forward to the day… 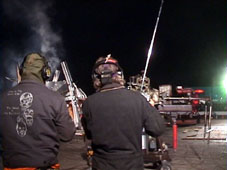 On December 23th, the last national holiday in the millennium for the Emperor’s Birthday, the street of Shibuya was filled with the shouts of couples. Walking toward to Yoyogi Park, those crowds went out of sight and people wearing strange costumes were walking in the opposite direction. In the area, there was a notice saying ‘SRL, Machine Circus at the end of 20th Century!!’. Going in the direction, Yoyogi National Stadium came into sight.

The admission was free and thousands of people were lining up in front of the entrance two hours before the doors opened. 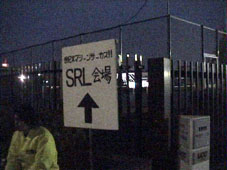 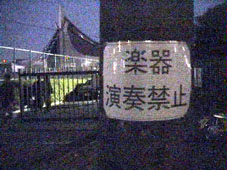 When the door opened, strange robots were standing silently, the smell of oil inside. The iron-barred ring was specially prepared for this outdoor event, and a huge tower made with cards and steel animals came into sight. Pop sound enhanced the emptiness like a deserted themepark. 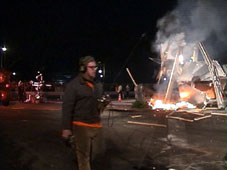 Survival Research Laboratories (SRL) based in San Francisco was founded by Mark Pauline in November 1978. Their performances use huge handmade robots made from scrap parts of industrial machines. The machines act and battle themselves and shows us a destructive utopia of machines. It is said that the audiences who restrain ourselves in high-tech society can get a catalysis, by seeing this huge open space where the machines act as machines themselves with our own eyes. This excites audiences more and more.