‘XYZ collective‘ and ‘CAPSULE‘, two newly opened space in Setagaya, Tokyo are currently hosting a joint exhibition. This was initially a project set up by a former Royal Academy of School student, Peter Donaldson, when he was entering a design competition targeted to graduates. He had invited Hideyuki Sawayanagi to host a project with a purpose of cultural exchange between the Japanese and English artists. Impressively, this project was chosen for the Best Award with the winning price of 10,000 pounds. However, the project, which was initially planned to launch on April this year, was delayed by the effect of the 2011 Tohoku Earthquake. It was then decided by Peter Donaldson that the direction of the project should be changed and relaunched as a joint exhibition, with a clear focus on its communication. The young artists were selected from Japan and Britain. Let us first have a look at the opening day of the exhibition.

Through the small entrance to the building is the ‘XYZ collective’, which looks somewhat like a garage in Britain, as the building was originally a warehouse. But one thing that is different from an ordinary garage is that there is a tense atmosphere created by the exhibited artworks. Contrasting ambience and sound from each work are reacting with each other to produce the unique space. 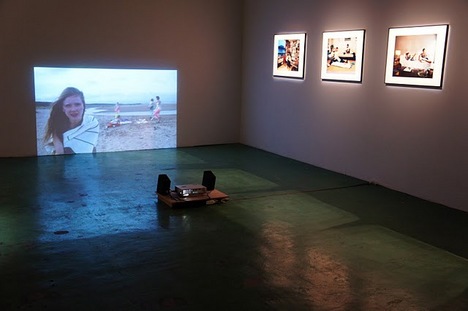 Drawing an attention with a huge screen is a work, ‘Don’t’ by Chicks on Speed, a female-only performance group led by Alex Murray-Leslie and Melissa Logan. On a white sandy beach, women dressed in white cloths and neon color tights individually perform and speak to the camera in turns. The unique rhythm is soothing, created by the repetition of slack and tension. Chicks on Speed is known for their performance on various genre such as music, motion graphics, dance and fashion. Although their careers are long, they keep maintaining their cutting edge style. Their diverse works include successfully collaborating with established designers such as Karl Lagerfeld and Jeremy Scott and introducing a CD from a band that made their name famous. As their second portfolio ‘Don’t Art, Fashion, Music‘ symbolises, their creation is nor art, fashion or something that fits into one genre. 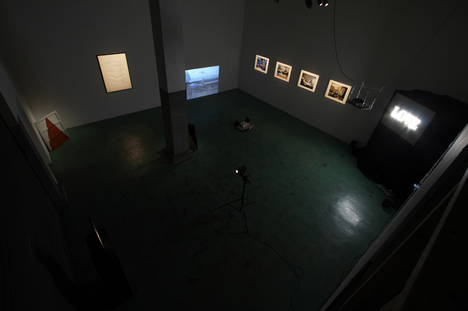 Hideyuki Sawayanagi “There is still love after the 3 minutes”

A sharp voice of a woman that overlaps the sound from the work of Chicks on the Speed, comes from a work ‘There is still love after the 3 minutes’ by Hideyuki Sawayanagi. A screen displays a count down to zero with a woman’s voice, displaying a message as it reaches zero. The message, ‘LOVE’ stays on a viewer’s mind as an afterimage. Though the message is instant, the impression is very strong. 3 minutes happens to be the length of shaking time during the 2011 Tohoku Earthquake. Sawayanagi explains “This work is not particularly about the earthquake. I wish this could trigger people to think the importance of the human connection, just like I did after the quake.” 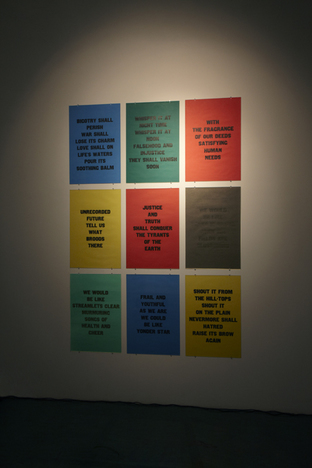 Ruth Ewan “Unrecorded Future Tell Us What Broods There”

Red, green, yellow and light blue coloured posters, which are aligned along each other are the ‘Unrecorded Future Tell Us What Broods There’ by Ruth Ewan. Slogans printed on the posters were quoted from a text by a anti-eugenics activist in the early 20th century. Although the aesthetic of the used font is somewhat rigid and cold, all the messages are positive; “FRAIL AND YOUTHFUL AS WE ARE WE COULD BE LIKE YONDER STAR”; “WITH THE FRAGRANCE OF OUR DEEDS SATISFYING HUMAN NEEDS”. The words sounds as though they are dedicated to the current Japanese and British situation. 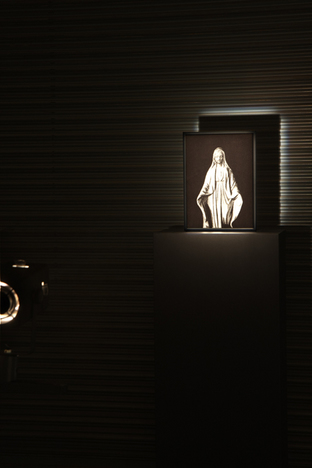 Satoru Aoyama “Prayer is passing through”

In addition to these works there are a work by Satoru Aoyama, ‘Prayer is passing through’, which is a portrait of Maria illustrated with black embroidery thread, as well as Yoko Asaumi’s photography, ‘Nice song and boat floats, Yokohama’, which expresses a hint of heavy impression among the overall pop feeling. 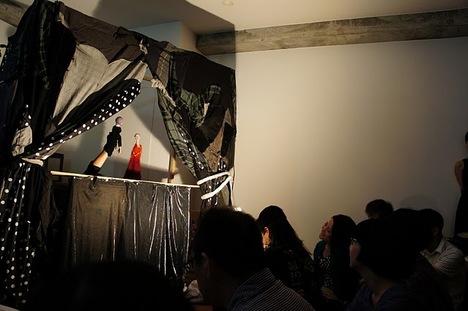 After visiting the ‘XYZ collective’, take a five minutes bus to the next venue, Capsule. The reception area is full with a large crowd attracted by the performances of artists. Soshiro Matsubara’s puppet theatre is a reminder of a child hood memory with a slight touch of black humour. Fuyuki Yamagawa’s performance was physiologically moving with sounds from a guitar, a cymbal, coronary tones and vices. 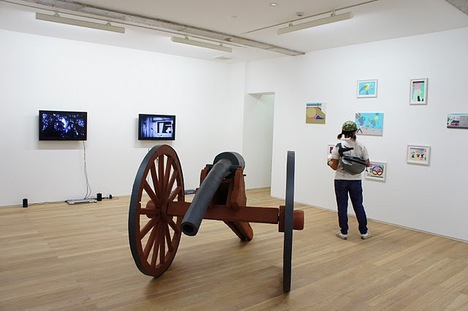 The exhibition space of the ‘Capsule’, compared to the ‘XYZ collective’ is a bright, white and cubic environment. At the centre of the space is a dimensional work, ‘A Quiet Explosion’ by Peter Donaldson. The humorous and ironic piece portrays a cannon with its head gently curved to face down. A large cannon that normally expresses an impression of stiffness, is turned by Donaldson into an absurd object that has lost its original purpose. 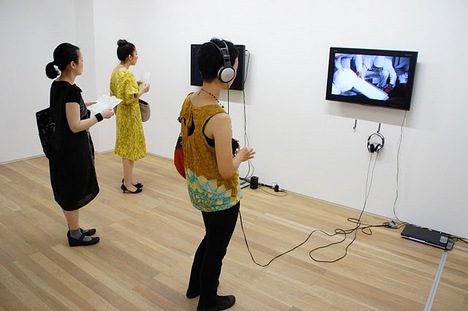 Among the motion graphic works, ‘NAKI-BOTARU’ by Aki Yahata attracted an attention. Shooting train stations and forests, produces a feeling of going back and forth between cities and the nature. Yahata, commenting in her own work that she would like to “make trailers of everyday lives”, was born in 1985 and currently enrolled in a master course in art research at the Tokyo University of Arts. Her future works would also express the ‘strange sensation’ that a woman feels in her daily life. 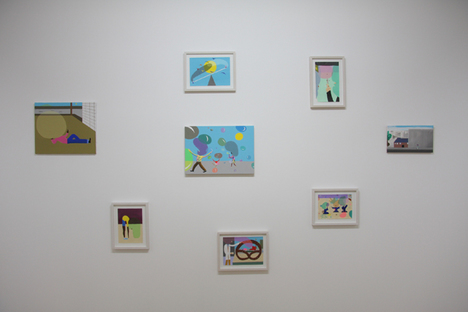 Other works included The Future Trilogy’ by Pil and Galia Kollectiv, which was creating a fascinating effect almost as a collaboration with the work by Aki Yahata, Peter McDonald’s ‘Mother’s Bobbles’ with pop candy-like colours, an installation, ‘TELEPHONE (SELF PORTRAIT)’ that aligned painted works by Soshiro Matsuhara. 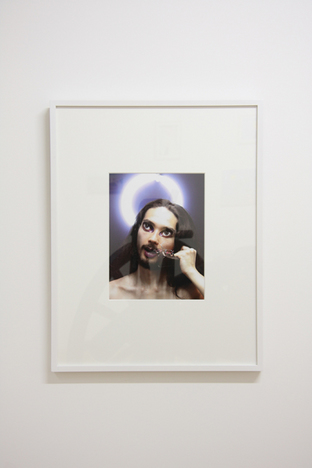 As the word ‘LOVE’ from Hideyuki Sawayanagi’s work symbolises, the common themes that emerged from the Japanese artists after 3.11 may be ‘love’ or ‘bonds’. Until now, the artists who were surrounded with overloading information, were creating diverse artworks that are beautiful, loud, comical and grotesque with various themes. The themes are being narrowed down into a few common themes such as love and heart, which is a meaningful change for the artists and viewers. Thus, even the works from Britain that has completely different background and issues, were somehow creating resonance to the feelings of Japanese people. 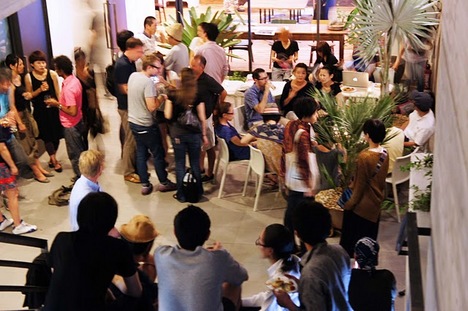 A cafe, ‘SUNDAY‘ beside the CAPSULE became gradually filled with people as the night went on.